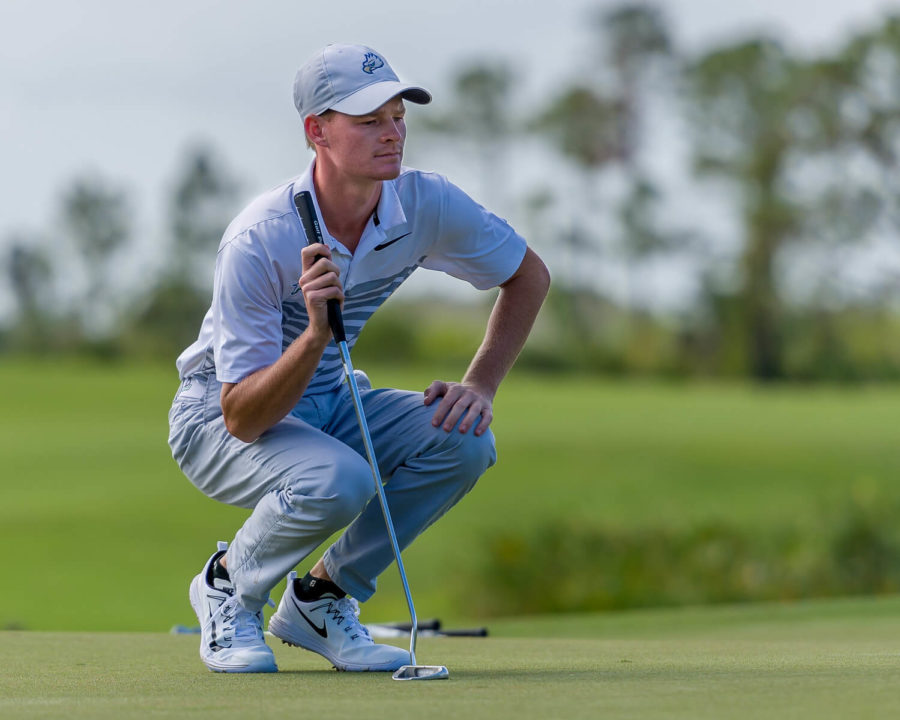 At the Fort Lauderdale Intercollegiate, the FGCU men’s golf team wrapped up their two-day tournament appearance finishing in third place behind eventual winner Austin Peay.
“I’m very proud of the synergy and commitment of this team to improve their talent this spring,” said FGCU head coach Eric Booker. “Being a part of this day and watching these guys break through to shoot the score they needed was very gratifying. Cole was amazing, but everyone did their part to make this day count.”
FGCU finished day one of the tournament in seventh place, but the team put together a final-round total (-11) of 277. The final score tied for the seventh-best round in program history and tied for the second-best final round in program history.
It was freshman Cole Castro winning medalist honors that highlighted the Eagles’ catapult up the leaderboard in the final round. Castro would finish with a 70-73-67: 210 (-6), with a career-best five-under  in the final round.
As a team, four of the Eagles’ counting scores were in the red. Along with Castro’s score, senior Michael Keymont finished tied for 12th (74-74-70: 218 (+2)), sophomore Doug Smith finished tied for 25th (75-75-71: 221 (+5)) and junior Andrew Potter tied for 30th (77-76-69: 222 (+6)). Senior Grant Renegar finished tied for 50th (75-79-72: 226 (+10)).
Redshirt senior James Leadbetter competed as an individual for the Eagles as he finished tied for 76th (78-77-77: 232 (+16)).
With the performance Tuesday, FGCU has now finished first, tied for first (lost in a playoff) and third in its first three spring tournaments.
Up next, the Eagles will make the trek up I-75 to compete in the USF Classic next Monday and Tuesday, Mar. 12 and 13.