Dow dominates with 30 points in 50-point win over Lipscomb 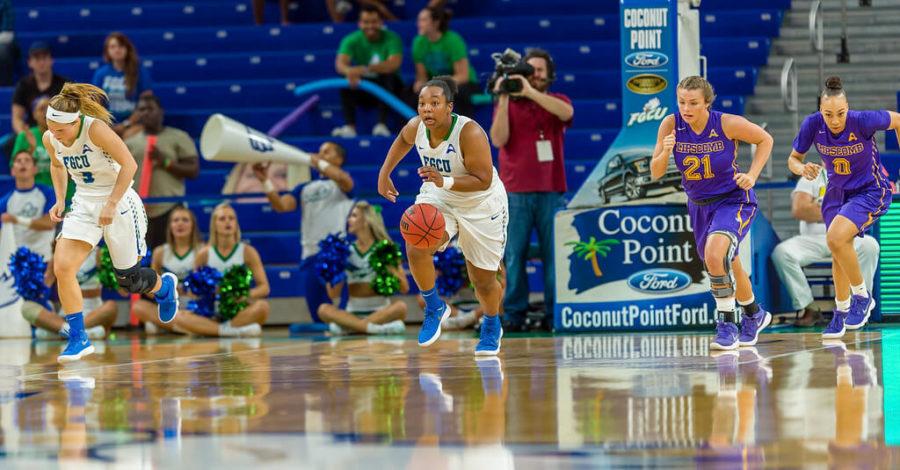 In one of the most dominating ASUN tournament games in FGCU history, the Eagles defeated Lipscomb with a 105-55 win over the Bisons.
“I was really pleased with the performance,” said head coach Karl Smesko. “We shot the ball really well. I thought China [Dow], when she came in, was instant offense. She had it going. She hit several threes in the first half. I thought it was a really good team defensive effort.”
It was the most points scored, largest margin of victory and the most three-pointers made in an ASUN Tournament game. The 22 three-pointers is tied for the most this season and three back of the NCAA Record. Dow broke an ASUN record with eight three-pointers.
Dow finished with a game-high 20 points, just one shy of her career high in last season’s ASUN Championship Game against Stetson. Nasrin Ulel had 17 and Taylor Gradinjan added 16. Jessica Cattani was the other Eagle to score in double figures with 13.
“I felt good,” Dow said. “My teammates gave me the opportunity to do that today and we were just really having fun out there and playing the right offense and doing what we needed to do right.”
The Eagles started off 0-6 from the field and trailed 6-0, but Dow would spark FGCU with seven first quarter points. FGCU would finish the first quarter on a 17-2 run, including scoring the final 10 points to take a 22-10 lead.
The threes would continue in the second quarter, as the Eagles scored 25 points in the second quarter and knocked down 11 three-pointers as FGCU held the ASUN Player of the Year to just four points and would finish just 2-13 from the field.
All that was left in the second half was to see how much this team would end up with as Jessica Cattani would knock down (how many threes?) and FGCU came away with a 50-point win with Rosemarie Julien not having any points.
“It’s just fun seeing everyone do well, play well, shoot the bell well,” Ulel said. “It just gets you hype seeing everyone do well around you. It’s fun to be around.”
The team shot 54 percent from the field and 50 percent from the three. The Bisons were held to under 28 percent from the field.
The Eagles will welcome (2) Jacksonville for the ASUN Finals on Sunday at 3 P.M. The Dolphins are coming off an 83-77 win over UNF and FGCU beat Jacksonville in both their games this season.