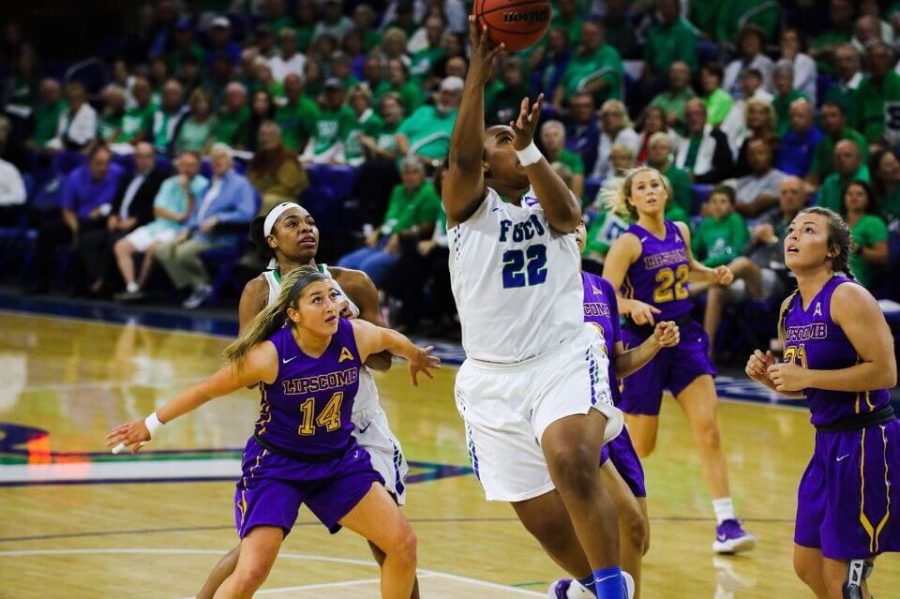 For the second straight season, the FGCU Women’s Basketball Team is heading back to the NCAA Tournament following a 68-58 win over Jacksonville. This is the fifth time in the last seven years under head coach Karl Smesko that the Eagles will be back in the dance.
“I am really proud of the effort from our young ladies,” Smesko said. “Jacksonville’s an excellent team and they’re definitely one of the most physical teams we ever played. That’s always a challenge for us. We found a way to compete on the boards. We had people step up for us.”
Also for a second straight season, China Dow was named ASUN Most Valuable Player following the game. She was joined by teammates Rosemarie Julien and Lisa Zderadicka on the All Tournament Team.
“It means a lot to win the MVP,” Dow said. “My teammates kind of helped me with that, so I give it all to them. The fans are great and being MVP is really don’t matter. We’re a champion and we’re going dancing. “
Dow came off a semi-final performance of 30 points and added 19, but it was Julien to lead all scorers with 19 after scoring only two points in the second half. Zderadicka played a season-high 33 minutes and scored 17 points, including a couple of tough layups late in the game.
“I feel like I had a bit of a rough start,” Zderadicka said. “I just thought I had to pick it up. We didn’t want to lose and I knew I was able to make a difference to help my team. I was just trying to seize opportunities to score and play good defense.”
It was a defensive battle early on as the Eagles struggled from the field as Jacksonville’s defense gave FGCU all sorts of trouble in the first quarter. The Eagles made just four field goals and trailed 11-10 after 10 minutes.
FGCU was held without a three-pointer until China Dow knocked one down with 4:47 remaining in the half to give the Eagles a three point lead. She would go onto to hit another three and finished with 15 of the 30 points from FGCU.
The turning point came from the Eagles in the third quarter as they went on a 13-2 run after trailing 39-36 to open an eight point lead midway through the third quarter. A two-point halftime lead extended to eight after three quarters and the Eagles were able to knock down their free throws later and hang on for the win and cut down the net afterwards.
“I’m not the biggest fan of ladders, but it was exciting to pull it down and fold it up,” Gradinjan said. “It was just nice, and I am glad we just won.”
FGCU will wait until Monday night at 7 P.M. to find out where they will be headed to in the NCAA Tournament.