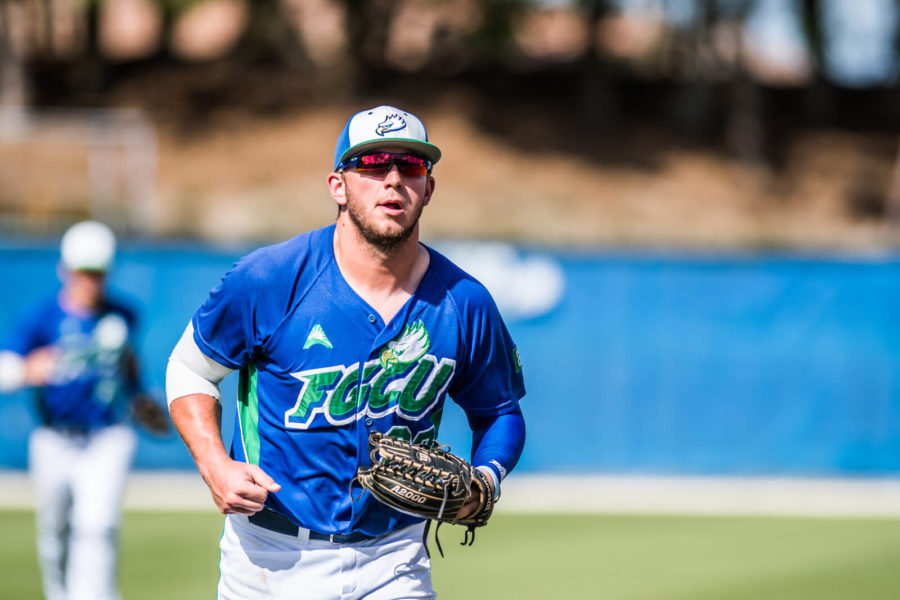 In the final game of a three-game series with Evansville, the Eagles completed the sweep with a 7-3 win.
Evan Lumbert (3-0) made the start and earned the win after going five innings. The Eagles combined to use three relievers to set up Kenton Herring for the six out save.
“Sweeps are hard at this level and we respect it,” said head coach Dave Tollett. “When we get it, we cherish it because they are tough to get. No one wants to be swept and teams are so close. Lumbert was pretty good and they did a good job of closing the game.”
FGCU scratched out a run in the third on the base paths and then took a 3-0 lead after a two-run single from Jake Smith. They added another run on a sacrifice fly.
Lumber exited without allowing a run, but Brian Wilcox came into the game in the sixth and gave up two runs without registering an out. The Purple Aces then added a run in the eighth but had the tying run cut down at the plate on a terrific throw from Eli Lovell to Spencer Levine to keep a one run lead.
“That throw by Lovell to keep us in the lead was a huge play for us,” Tollett said. “It gave us momentum back and we were able to put up some runs because of it. That was a game-changing play.”
The Eagles were able to extend the lead a half inning later as Marc Coffers came up with runners on first and third. He would lay down a bunt, but the throw went into the outfield and both runners would score. Coffers would come around to score one batter later on an RBI double from Gage Morey.
Despite bringing the tying run to the plate in the ninth, Herring was able to end the game on a ground out to third as FGCU earned their 13th win of the season.
Up next, the Eagles will begin their mid-week games against in-state schools with one coming up on Tuesday at 6:30 against USF.