Men’s Basketball Prepares for opening round of NIT vs. Oklahoma 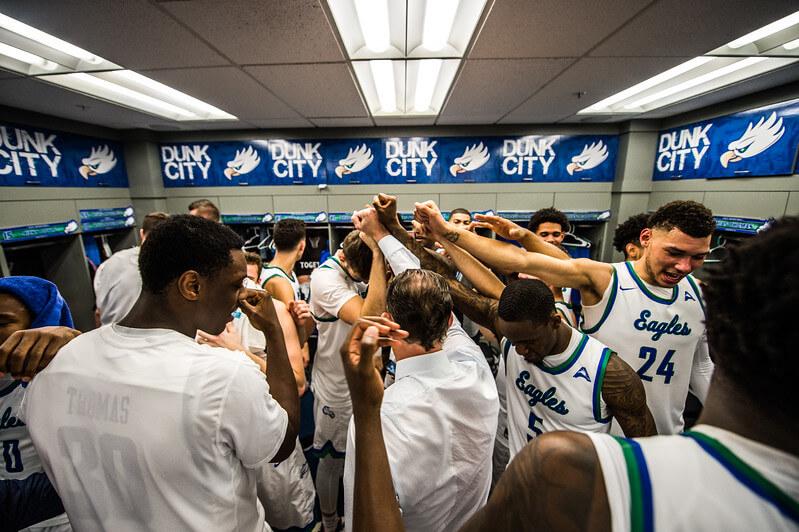 Still trying to move past the heartbreaking loss in the ASUN finals where the Eagles nearly came back from a 32-point deficit, (7) FGCU is set to head to head on the road to face off against (2) Oklahoma State in the first round of the NIT.
Like the Eagles, the Cowboys were left out of the NCAA tournament, but for a different reason. They fell in the Conference Championship, but definitely felt like they could have got an at-large bid into the NCAA tournament.
They finished the regular season with a 19-14 record and played an extremely tough schedule but were left out of the NCAA tournament. They swept the regular season series against Big 12 Champions Kansas and split the regular season with Oklahoma before beating them in the conference tournament by 11 despite the Sooners getting a 12 seed in the tournament.
“They definitely can use that as a chip on their shoulder,” said junior guard Zach Johnson. “That is how I’m going to look at it. I’m not going to say it is a good thing for us, but we’re going to approach the game the same way and we are going to respect them as we do any other team.”
The Cowboys’ leading scorer is Jeffrey Carroll, who averages 15.1 points per game. He is shooting right around 41 percent from the field and nearly 33 percent from behind the arc. He has made a team-high 60 three-pointers and is also second on the team in rebounds at 6.2 a game.
“We’ll have Zach on him,” senior guard Brandon Goodwin said. “I think Zach will do a great job defending him, pressuring him and help him out as much as best we can. That will be our main emphasis: controlling him.”
The Eagles, who have appeared in the NIT once before, come in with a record of 23-11 and had a 12-2 record in conference play. FGCU won their first 12 games in conference to secure their automatic bid. It was a tough start to the season for the Eagles as they lost six of seven games in non-conference and had a sub-.500 record, but nearly beat #11 Wichita State with a seven-point lead in the second half, but ultimately fell by 10.
They could look no r than the FGCU Women’s team who were left out of the tournament two years ago and made a run to the NIT Finals back in 2016. Should the Eagles get that far, they will have a chance to play at Madison Square Garden.
“That is one of my dreams as a kid to play there,” Johnson said. “It is one of the most historic arenas out there and hopefully I can get a chance to get out there.”
Offensively, Brandon Goodwin and Zach Johnson have been carrying the load for much of the season as the two of them were part of the ASUN Conference Team and averaged 42 percent of FGCU’s points. Also, the Eagles got a big lift from Michael Gilmore after he had to sit out the first half of the season after transferring from Miami, as he led the team in rebounds.
Injuries plagued FGCU for most of the season, as they did not have one game until the conference tournament where every scholarship player was active. They dealt with concussions to numerous players and had a couple of nagging injuries, keeping guys like Christian Carlyle and Antravious Simmons out of a couple of games.
Ironically enough, if the Eagles were to advance to the quarterfinals, they have a chance to play their former coach in Andy Enfield whose team also missed out on the NCAA Tournament. However, they first need to get through Oklahoma and then play the winner of (3) Stanford vs. (6) BYU.
“I know a couple of guys from BYU so if we could get a win and they can get a win, that would be cool,” Goodwin said. “It will be fun and I am just looking forward to the NIT.”