FGCU falls to Oklahoma in NIT 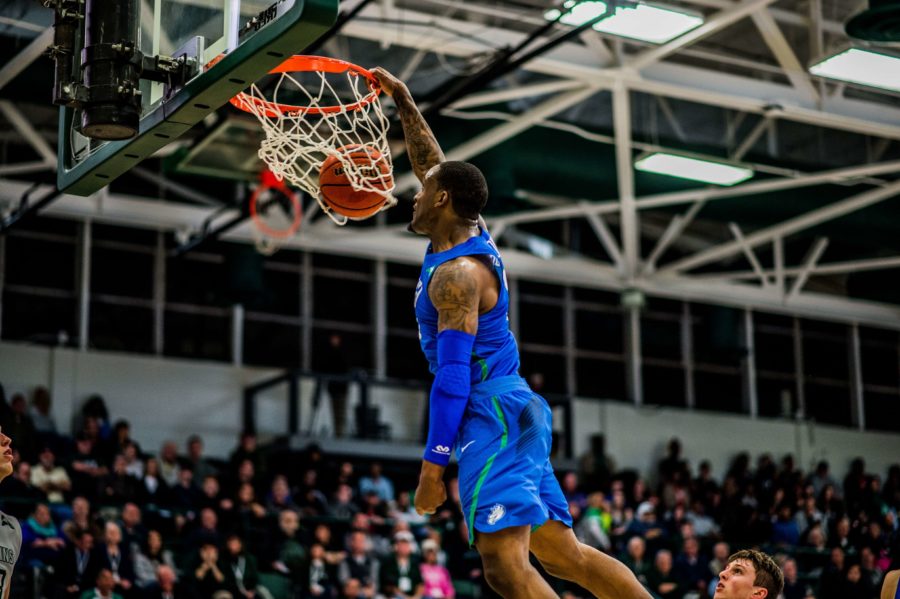 After their loss versus Lipscomb in the ASUN Tournament Championship, the Eagles fell 80-68 in the first round of the NIT.
Brandon Goodwin, though, broke his home single-season record of 629 points as he had 18. Zach Johnson led the way with 23
“I complement our guys for not folding, which they didn’t do all year,” said head coach Joe Dooley. “We were down and put ourselves in some bad situations, and we fought back like we usually do. I thought there were stretches we played really well. We also had some stretches that we put us in harm’s way and they took advantage of that.”
The Eagles started the game off similar to the 2013 sweet-16 team, with a dunk from Zach Johnson. The team would go nearly five minutes without scoring until they got a second bucket from Goodwin and went into the second quarter trailing 14-11. The very slow stay continued into the quarter, as the Eagles trailed as many as 14, but Godwin’s half-court shot at the buzzer would bring FGCU within in nine as they trailed 37-26.
Not only were the Eagles struggling offensively, they also were caked for 10 fouls, compared to Oklahoma State’s three, and turned the ball over 12 times.  An early three out of the gate cut the lead to eight, but Mitchell Solomon of Oklahoma took it to both Ricky Doyle and FGCU as he posted up for a bucket. He would then force Doyle into an ill-advised shot on the defensive end and come back and hit a three, as he set on a 5-0 run himself.
The frustration continued as Dooley was issued a technical foul after he thought Gilmore was fouled on a dunk attempt, but instead it resulted in two free throws for the Cowboys and what was once an eight-point game late in the third quarter, became a 17-point lead after the third quarter at 60-43.
However, just three minutes into the quarter, they would hit three triples and get within six though Oklahoma State continued to get to line as they attempted 41 free throws compared to just 18 from FGCU. The Cowboys went on to finish it off with a 12-point win.
“They played hard,” Goodwin said. “Their coach put them in a good position to guard us and keep me and our perimeter guys out of the lane. When we did get in the lane, they converged really hard around us.”
Unlike the regular college basketball games, the NIT moved back the three-point line back a bit and had both four quarters instead of halves and wider lanes among other changes.
“I didn’t see enough of it so I can’t judge it yet,” Dooley said. “I think the flow of the game didn’t change much and obviously you are going to see more free-throws.”
As a team, the Eagles shot better from the field than their opponent as they were at 38 percent compared to 36 percent, but Oklahoma State made 32 free throws compared to just 12 from FGCU.
They also allowed the Cowboys to have 13 offensive rebounds, which resulted in seven points. This also ends up being the last game for a couple FGCU players as Goodwin, Christian Terrell, Antravious Simmons and Joshua Ko will all be graduating this upcoming spring. The Eagles finished the season with their sixth straight 20-win season. They finish the regular season with a record of 23-12 and will look to get back into the NCAA Tournament next season.
They will have some new names to the team n of a couple of transfers in Troy Baxter and Haanif Cheatman and as well as the addition of incoming freshman Zach Scott and redshirt freshman Ryan Rocuant for dunk city.