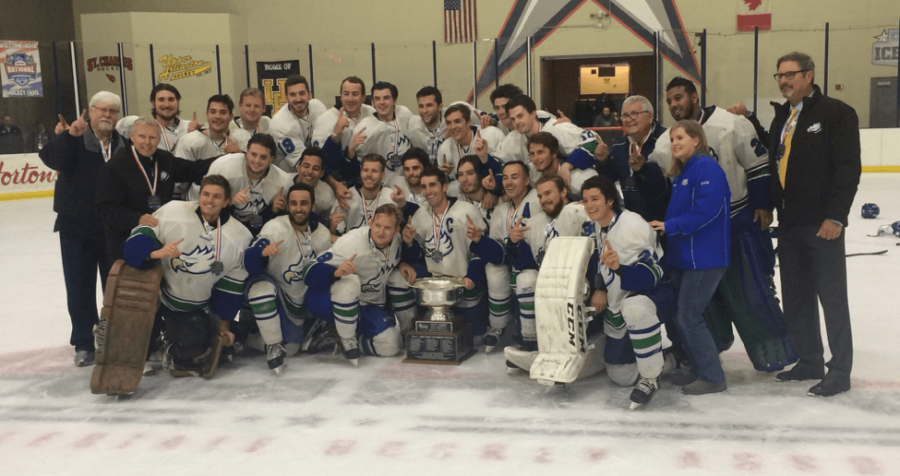 The Eagles D2 Hockey Club, led by head coach Bob Brinkworth, won their third ACHA Division 2 National Championship Tuesday afternoon by a score of 5-1 over the Lindenwood Lions.
For the Eagles this was their sixth National Championship appearance. The National Championship comes just two seasons after their last in the 2015-2016 season. Since the 2011-2012 season the Eagles have won three championships out of the last seven seasons.
The Eagles stormed their way into Nationals holding a 27-3-1 record for the 2017-18 season, dominating their opponents in the process as they held a goals for of 184 and a goals against of 73.
Joshua Koerner led the way for the Eagles offense, much like he did in the regular season (30G 25A) with his 15-point performance (9G 6A). In five games, Koerner tallied at least one goal in every game and in the semifinals against the University of New Hampshire had a five-point performance with (who?). (4G 1A).
Goaltender Bradley Rambhajan led the way for the Eagles in the net as he picked up four wins for the Eagles, including the 5-1 win in the championship game. Leading up to the championship game Rambhajan held a 1.67 GA and a .939 SV%. Tyler Tracy picked up the other win for the Eagles in their second game of the tournament with a 7-2 victory over Adrian College, stopping 23 of the 25 shots he faced.
The Eagles won all five matchups in the trip to Columbus, Ohio. Their first win came against the University of Northern Colorado by a score of 5-1. The second win came over Adrian College as they defeated them by a score of 7-2. The Eagles’ third win came in the quarterfinals over William Paterson University by a score of 5-1. In advancing to the semifinals the Eagles took on the University of New Hampshire and piled on eight goals in an 8-3 victory that propelled the Eagles to the National Championship game.
In the National Championship game the Eagles were set to take on Lindenwood University. For Lindenwood it was their first National Championship appearance.
After one period of play the Eagles took a narrow 1-0 lead into the intermission with a goal from Steven Noyes, his third of the tournament.
The Eagles added two power play goals late in the second period to expand their lead to 3-0. The first of the two goals came (at what time) from the captain and fourth-year player, defenseman Logan Garst, with the assists going to Jordan Klotz and Eric Mabie. Jake Leonard added the second goal on the power play just 2:12 later with the assists going to Eric Mabie and Josh Koerner.
Brandyn Fogarty extended the lead for the Eagles just 1:55 into the final period with an unassisted tally.
With the help of Mike Haskins and David Wong, Josh Koerner scored the fifth and final goal for the Eagles at 8:36 while the two teams were 4 on 4.
The Lions broke Rambhajan’s bid for a shutout with a shorthanded tally from Jet Bell with 2:34 to go, but it was too little too late for the Lions as the Eagles closed out a 5-1 victory for their third National Championship.