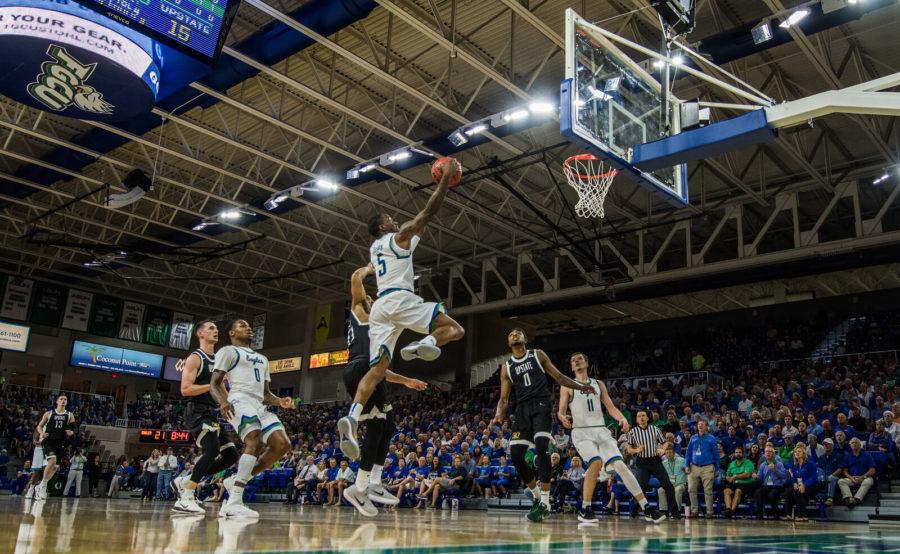 After another terrific season from the FGCU men’s basketball team, the awards continued to pile on for the Eagles.
Brandon Goodwin was named to the NABC District 3 Team along with fellow ASUN First Team Player Garrison Mathews. Zach Johnson was named to the second team, along with both Rob Marberry of Lipscomb and Anthony Tarke of NJIT.
“It’s says a lot that Brandon is now the only player in program history to be named to the First Team twice. He’s put together another great and arguably the best season in program history,” said FGCU head coach (name). “Zach has certainly come on strong as of late, but he might have been our most consistent player all year. He’s also often guarding the other team’s best player, and that sometimes is overlooked with his offensive game.”
For Goodwin, he appeared on this list last season where he set a single-season record of points scored with 629, only to pass that this season with 632. He averages 18.6 points per game and was named ASUN Player of the Week in 2018 after being named ASUN Newcomer in 2017. He had a career-high 34 points and finished the regular season averaging 27.7 points per game in his final three.
Johnson finished 11th in the ASUN, averaging 15.6 points and exploded for 37 points in the ASUN Final to tie a program record. During that game, he made nine three-pointers and then followed that up with 23 in the NIT. The junior averaged 26.7 points during the ASUN championship and did it on the defensive end as well as registering 68 steals for 16thhighest in the nation.
The award is voted on players from both the ASUN and Big South Conferences and was chosen by the NABC.