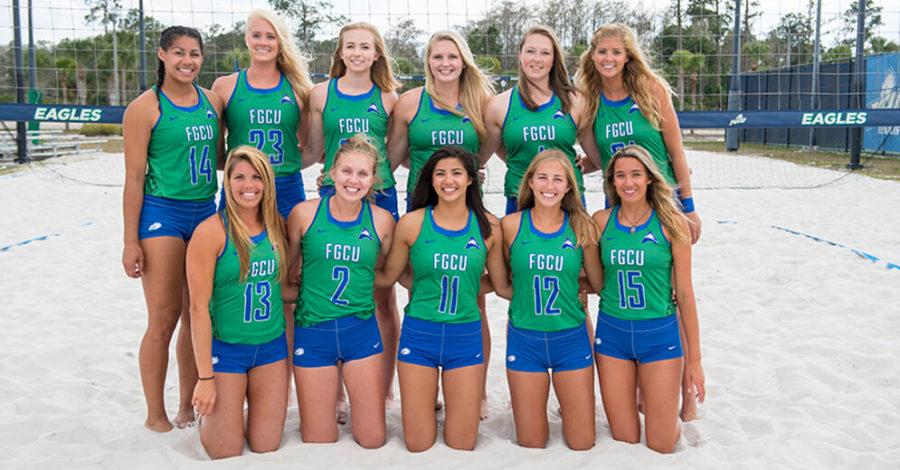 For the first time in program history, the FGCU Beach Volleyball Team earned an ASUN Weekly Award from Snowy Burnam and Kayla Whetstone.
The freshman pair began their collegiate career with a 3-1 record, including a win over #15 FAU for the team’s first-ever win over a ranked opponent.
“Snowy and Kayla are playing with a chemistry that would typically take a lot more time to develop and a maturity that you don’t normally see from freshmen,” said head coach Matt Botsford. “They adapted really well to tough playing conditions in the wind with solid ball control and good decision making all weekend.”
Burnam is the only one in the duo to play indoor volleyball in the fall but teamed up with Whitestone and won their first ever match against Houston Baptist 21-16, 21-18. The Huskies came into the weekend receiving votes in the national poll.
They followed that up later in the day with a dominating performance, dropping only four points in the second set with a 21-14, 21-4 win. Their lone loss came against #11 Georgia State 24-26, 17-21.
Their final match against the Owls will go down as one of the biggest wins in program history as the duo helped escape a 2-0 hole with a 15-21, 21-18, 15-13 win.
“The talent level and depth of our roster just continues to improve and the dedication displayed by those players is helping to create a really special learning/training environment,” Botsford added. “Kayla and Snowy being named ASUN Pair of the Week for the first time in program history is another benchmark that we can look to proudly as we evaluate our progress.”
Fans will have their first chance to see the team on campus on Friday when University of Tampa comes to FGCU for a match at 3 P.M.