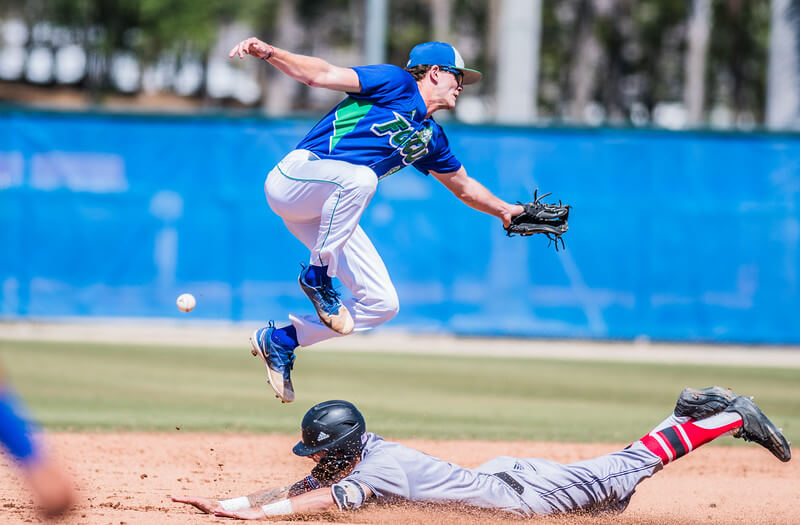 The FGCU baseball team (13-5) dropped the second game of a three-game series Saturday afternoon to Rutgers (11-6) as the Eagles lost 6-3.
“We had some chances to score a few times, but he [Rutkowski] was good,” stated FGCU head coach Dave Tollett. “We didn’t get a lead-off hitter on until the seventh, but we still had some opportunities. They were better than us today, but hopefully we can salvage a game out of the series tomorrow.”
Redshirt junior Josh Dye (3-1) started on the mound for the Eagles in his first loss of the season after going six innings while allowing three runs only, one earned, on six hits while striking out six and walking just one.
Dye was countered by Rutgers starter Harry Rutkowski, who also went six innings and scattered four hits while allowed one earned run. He struck out seven and walked three, but was able to dance around some trouble to pick up the win.
The Scarlett Knights took a 2-0 lead in the top of the third off of a two-run single from Mike Nyistor. Both runs were unearned as the Eagles’ fielding did Dye no favors after the southpaw retired the first two batters of the inning. Rutgers would add to its lead in the sixth after a lead-off double, sacrifice bunt and sacrifice fly by Tyler McNamara plated Kyle Walker to make it 3-0.
The Eagles responded in the bottom of the frame with redshirt junior Jay Hayes’s one-out solo shot to left center. However, the Scarlett Knights bounced back with three runs in the seventh to extend their lead to 6-0.
That score line would stay intact into the eighth, thanks to a quality appearance out of the bullpen by sophomore Trey Vickery. Vickery retired all four batters he faced after relieving senior Parker Hamilton.
Redshirt senior Gage Morey led off the Eagles’ portion of the eighth with a single to center. Morey moved up 90 feet on a single to left by Hayes, and both players scored on a single from redshirt sophomore Kohl Gilmore, aided by a miscue by the Rutgers’ center fielder.
After sophomore Sebastian Gruszecki worked a scoreless ninth, the Eagles would bring the tying run to the plate in the bottom, but to no avail as a ground out ended the contest.
The final game of the series is scheduled for Sunday at 12 p.m.