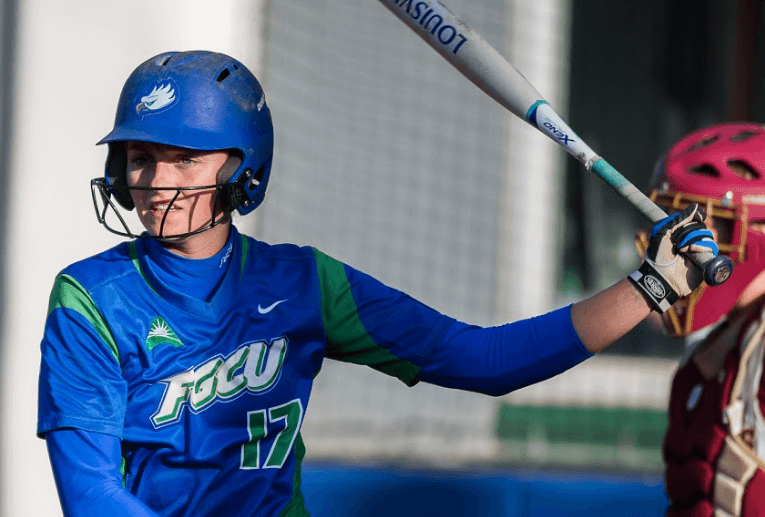 After being rained on Tuesday night, the FGCU Softball team was back in action on Wednesday night for nearly the first time in a month and split a double header with Marshall.
Raquel Fournet drove in all four runs including the final run in game one on a walk off single in a 4-3 win. The Eagles then led 4-1 heading into the seventh of game two, but gave up seven runs in the inning and dropped just their sixth game of the year 8-4.
“It was a couple of hard-fought ball games,” Head Coach Dave Deiros said. “A little disappointed to come out on the losing hand of the second one, but we got to see ourselves make some adjustments, put ourselves in a position to win. We will do better in those situations again. We are going to do some things in the next few days to make sure we are ready for Stetson.”
Riley Randolph made the start in the first game and earned the win pitching a complete game and earning her tenth win of the season.
The Thundering Herd took a 3-0 lead with runs in the first with three runs coming in the inning, but Fournet would get going with an RBI single in the fourth after Kelsey Huff triples for the first hit of the game.
The game would remained 3-1 until the sixth when Fournet hit a two run home run to tie it at three. Just an inning later, Marshall would intentionally walk Huff to load the bases to get to Fournet and she would make them pay with a game-winning hit in the bottom of the seventh.
“We battled pretty much all game throughout for seven innings hitting, defense and pitching,” Fournet said. “I’m glad she pitched to me, free RBI’s.”
Morgan White was in the mound for game two and both her and Marissa Messimore would get the first 13 outs of the game before Bauman took over in the fifth.
FGCU jumped out to an early 1-0 lead after Fournet drove in a run with a double in the second, but the Thundering Herd tied the game up a half inning later on an error from third basemen Brittany McGuire.
Ashley Swiderski put the Eagles back up in the fourth with an RBI double in the fourth. Marshall threatened to score in the fifth, but Bri Innamorato would cut down the tying run at the plate and then homer in the home half of the fifth to extend the lead to 3-1.
It would eventually be 4-1 after Swiderski drove in another run, but the Thundering Herd were able to tie it up in the seventh with some week-placed hits. FGCU looked to have been out of the inning with the score tied, but an Innamorato throwing error led to two runs scoring and they would score another two runs and out the game out of reach.
Up next, the Eagles will open conference play versus Stetson on Saturday with a double header scheduled for 5:00 and 7:00 P.M before a game on Sunday. FGCU won two out of the three games last year played in Deland.