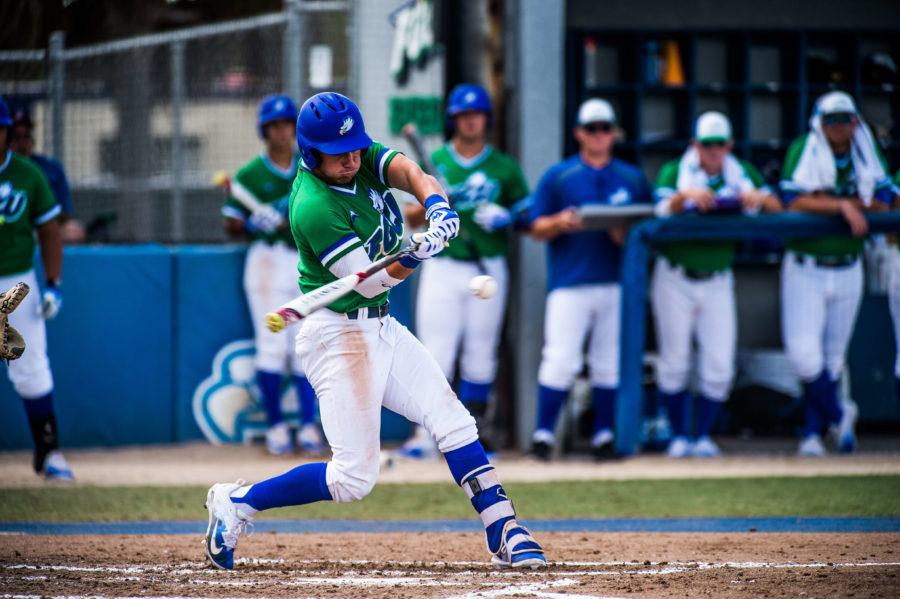 From the start, the FGCU baseball team dominated UAB 14-3 for their 17th win of the season.
“We need those games. Our kids need those games,” head coach Dave Tollett said. “A lot of people get to play. Everyone gets to swing a bit. Guys get to pitch so those are good.”
Josh Dye was on the mound and earned the win, allowing just one run in six innings and only throwing 62 pitches. Christian Townsend and Tyler Shuck each combined to pitch the final three innings.
“I came out and I didn’t feel my best in the beginning, but I just worked off my strengths,” Dye said. “Just fastball command kept me in the game and as the game went on, I just think I got better.”
The Eagles jumped out to a 3-0 lead after a Jay Hayes three-run home run in the first inning. The Retrievers scored one at the top of the second but two more runs in with a long double to left center field pushed the Eagles’ lead to8-1.
FGCU was held off the board in the third, though they scored five runs in the fourth and had 13 hits through four innings with a 14-1 lead.
They finished with just 16 hits and cruised through for an 11-run win over UAB. Gage Morey finished with a game-high for hits as well.
“We are clicking on all cylinders,” Hayes said. “These are the type of games that are good to work on stuff and try to do something good.”
With multiple pitchers from the Retrievers not on the trip due to disciplinary reasons, they will go with a bunch of different guys in the final game of the series. The Eagles will most likely have Brian Wilcox on the mound, as FGCU looks for the series sweep.