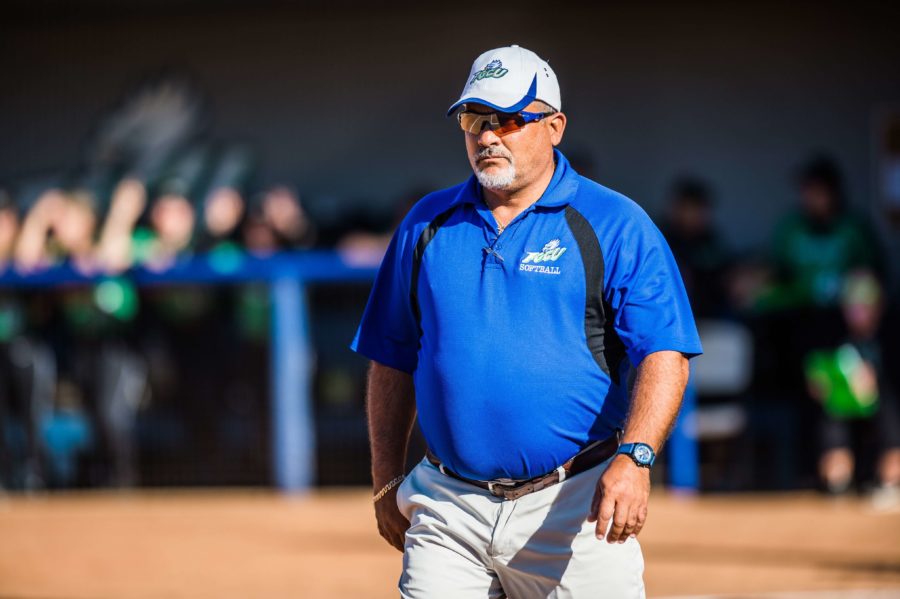 Following the FGCU softball team’s win in game two of a double-header on Saturday, the Eagles’ founding father coach earned his 600th win.
Deiros began coaching in 2001 with the Eagles and has had 12 seasons with a winning record, including eight seasons of 35 or more wins. Already with 26 this season, Deiros is well on his way to another 35-plus win season.
“I have been fortunate to have my dream job for 17 years,” Deiros said. “That’s the reality of the matter. It’s really special that my first All-American—the first kid I brought to this program, Ashley Cecil, whose two daughters are in the Golden Gate Little League—were able to share the moment.”
“I told her after the game that people like her are what makes this program what it is because [our] success early [on] allowed us to get more and more players [to] buy in.”
One hundred and three of the six hundred wins have come in conference play, with 36 sweeps. He has gathered his team to multiple rankings inside the top 25, including a school record of #5 while spending 11 consecutive weeks ranked.
So far this season, his team has won 27 games in their first 34 and has received votes in the rankings. Despite not being picked to win the ASUN Conference this season, the Eagles have the best record in non-conference play and are currently 2-1 in the ASUN.
He and his team will look to continue their historic start to the season when they face off against the reigning ASUN Champions, USC Upstate, on Friday, March 30 in a three-game weekend series.