Career outing for Lumbert in win over Miami 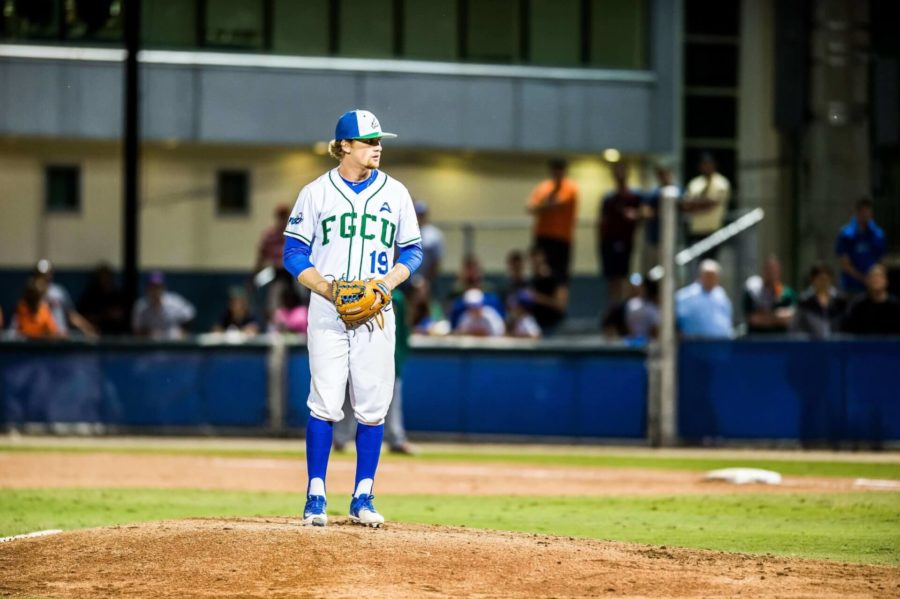 The FGCU baseball team picked up a huge win at home in front of 1,982 fans in a 1-0 win.
“I think we can play any team in the county and most importantly the kids believe they could play with anyone in the county,” head coach Dave Tollett said. “I think last year we’re building off what we did and these kids are very confident.”
Evan Lumbert pitched a career high eight innings striking out 12 batters and earned his fourth win of the season. Off the bench, Eli Lovell plated the only run in the bottom of the eighth with an RBI single scoring Alex Brait from second.
For the Hurricanes, Daniel Federman also went eight innings and did not allow an earned run, but it was his throwing error on a pickoff attempt that led Brait to second base, who would ultimately score the only run of the game.
Federman held the Eagles hitless until the fifth inning when Eric Gonzalez singled through the hole for a base hit. The only other hit until the eighth inning for FGCU came courtesy of Marc Coffers on a ball that got caught in the lights and did not even leave the infield. He stole second for his ninth of the season, but was left stranded.
Though Lumbert was in complete control pretty much throughout, he faced a jam in the sixth inning after he allowed both the first two runners of the inning to reach. After a sacrifice bunt set up second and third, he would get Dylan Cloonan to strike out and then get Hunter Tackett to ground out to short to keep the game scoreless.
“That fires me up,” Lumbert said. “When there is runners in scoring position, you just got to lock in.You can’t let the game overtake your focus or anything. I just made a good pitch and got a ground ball to get out of it.”
Entering he ninth, Kenton Herring came on to close and also allowed the first to base runners to reach, but after Tackett was unable to get a bunt down, Herring got him two roll over one for a 6-4-3 double play. Burns would eventually fly out to center field after fighting off a couple of close pitches to seal it for the Eagles.
“It feels great,” Lovell said. “That’s a quality ball club, quality team and to come out in a mid-week and beat a team like that is huge.”
This is the team’s third straight win over Miami and they have now held the Hurricanes scoreless for 19 innings dating back to 2016. FGCU won last season at Swanson Stadium 3-0 with just over 2,000 fans in attendance.
Up next, the Eagles will travel on the road to face Jackson State for a weekend series. The two teams met last season and resulted in a sweep for FGCU.