March For Our Lives: Naples and Fort Myers 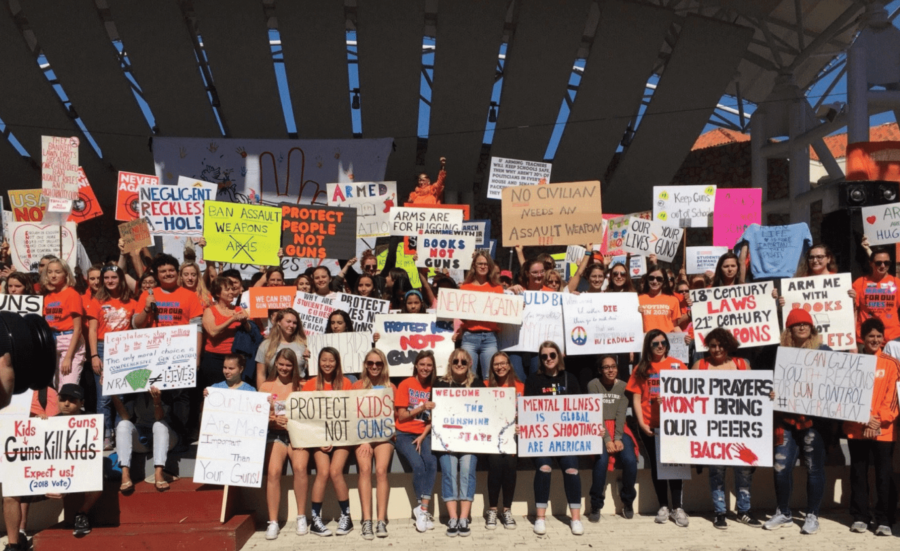 We’re only 12 weeks into 2018, and there have already been 17 school shootings in the United States where someone was hurt or killed, according to CNN.

On February 14, there was a shooting in Parkland, Florida, resulting in the deaths of 17 students at Stoneman Douglas High School, but this wasn’t the first or the last school shooting within the first three months of 2018.

The survivors of the shooting in Parkland used their voices on the news and on social media, and created the March for Our Lives movement to help put an end to this trend.

“One of the things we’ve been hearing is that it’s not the time yet to talk about gun control,” Camerson Kasky, a Parkland survivor said. “So here’s the time that we’re going to talk about gun control: March 24.” The mission statement for March for Our Lives says “Not one more. We cannot allow one more child to be shot at school. We must make it our top priority to save these lives.”

This march was brought locally to Naples, where 3,000 people came out to protest gun laws, according to  Daily News.

Meagan Garcia, an ACE student at FGCU, attended the march that took place at Cambier Park on Saturday.

“I personally don’t believe any sort of gun is necessary, but I don’t believe in disarming civilians while the police are still armed, as history shows that this country has a problem with police brutality,” Garcia said. “I feel that this is a very multi-dimensional issue, and that it will require a lot of work from a lot of different points to really stop gun violence.”

What makes the topic of guns and gun reform in the United States different than most countries is because of the Second Amendment, which protects the “right to bear arms.”

No official figure on the amount of guns in the United States exists but there is thought to be around 300 million, nearly enough for every person in the country, according to the BBC.

According to the Seattle Times, in 2016, the latest year for which data is available, production of firearms spiked to 11 million, in part due to a belief that Democrats would win elections that year and access to semiautomatic weapons such as an AR-15 rifle would be restricted.

But, limiting access to guns, and even banning some, is possible. Australia did it successfully two weeks after a shooting in 1996 where 35 people lost their lives. Semi-automatic rifles and shotguns were banned. In the 21 years since the laws were passed, about one million semi-automatic weapons were sold back to the government and destroyed, according to BBC.

“As a result for the march, I would just like to see more events being organized,” Garcia said. “I am hoping for a surge in voter registration, as well as actual voting, especially with young people.”

The only way things will be fixed is if we fight for it, we vote and we march, and we look to other nations that have successfully banned the machines who have one purpose: murder.