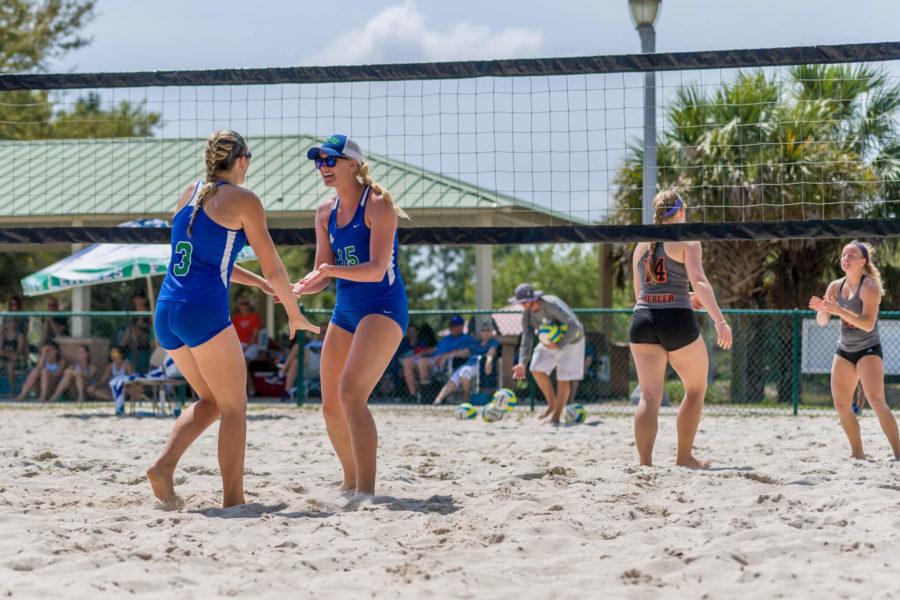 The FGCU beach volleyball team (7-6, 2-0 A-SUN) earned two wins over Costal Carolina (5-0) and Mercer (4-1) to begin A-SUN Conference play on Bear Beach at Mercer, snapping a three-match losing streak. With the wins, the Eagles, who are receiving votes in the AVCA Coaches Top 20 poll, improved to 8-7 all-time against the Bears and 4-0 all-time against Chanticleers.
“Seven of our 10 matches went to the third set today, and to win six of those is a tremendous accomplishment,” FGCU head coach Matt Botsford said. “I really liked our play in those deciding scenarios. That said, there is a lot for us to clean up moving forward. I didn’t think our offensive output was as efficient as it can be, and we need to see some improvement in transition. As our opponents get to know us a little better, day two is always tougher.”
Beginning with Costal Carolina (0-4, 0-2 A-SUN), all five pairs for the Eagles defeated the Chanticleers. The No. 1 duo of junior Amanda Carroll and senior Mackenzie Allen defeated juniors Dora Lulic and Carla Cahill by a score of 21-12, 21-11. No. 4 pair of freshmen duo Snowy Burnam and Kayla Whetstone would follow defeating freshman Kyla Manning and sophomore Autumn Otto 21-15, 19-21, 15-11 before No.3 pair of sophomore Giovanna Borgiotti and senior Ashley Glickert defeated seniors Aleksandra Djuric and Leah Hardeman 21-17, 13-21, 15-11 to claim the win for the Eagles. The No. 5 pairing of junior Kaitlan Krivdo and freshman Alayna Ryan defeated the freshman duo of Kalin Eske and Aristea Tontai 19-21, 21-16, 15-10 before the No. 2 pairing of juniors Karissa Rhoades and Katherine Puisis defeated sophomore Kinga Windisch and freshman Tanner Gauthier 21-15, 21-11.
Going into match two against Mercer (6-9, 0-2 A-SUN), Carroll and Allen defeated senior Sophie Peel and freshman Kasey Ogden 21-12, 18-21, 16-14. Whetstone and Burnam would defeat the freshman duo of Kylie Keeling and Elli Merchant 21-17, 20-22, 15-9 before Borgiotti and Glickert defeated sophomore Amber Gibson and freshman Gracie Garanich 21-19, 21-18, claiming another Eagles win. Krivdo and Ryan would fall 21-16, 17-21, 12-15 to senior Marina Chavez and freshman Emilee Wissmach before Rhoades and Puisis defeated senior Jessica Johnson and junior Elli Gibson 18-21, 21-15, 15-11.
The Eagles return to action as they face Coastal Carolina and Mercer for the second time. The Eagles will wrap up their road trip in a doubleheader against #17 Stetson before returning home to for their final five matches of the regular season.