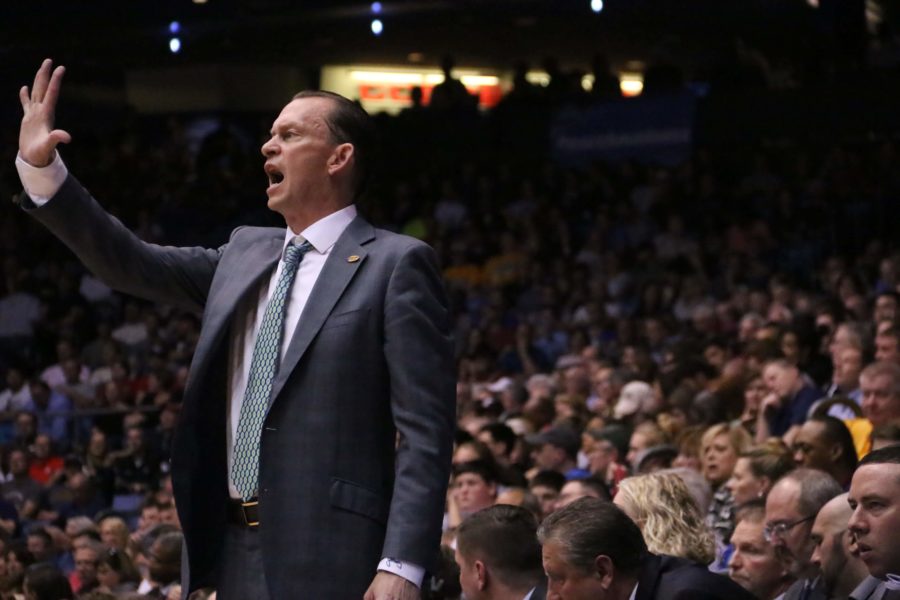 After five seasons coaching FGCU, Joe Dooley will be leaving to take over as the East Carolina Head Coach for the 2018-2019 season.
Dooley was the heat coach for the Pirates from 1995-1999 and compiled a 57-52 Record at East Carolina before taking a couple of assistant coaches jobs most notably with 2008 National Champions, Kansas Jayhawks.
After the Eagles reaches the sweet 16 in 2012, Dooley took over for Andy Enfield and helped the Eagles reach the postseason in all his five years. He coaches FGCU to a win in the first round f the NCAA tournament in 2016 and reached the tournament again in 2017. Dooley was apart of three ASUN Regular Season Championship and two ASUN Tournament Champions and was named ASUN Coach of the Year the past two seasons.
During his tenure, he finished with a 114-57 record while with FGCU and will be taking over a team that went 10-20 and lost in the first round of the American Conference Championship.
Dooley made an annual salary of $350,000 and Dooley will likely be getting an increase with the Pirates. Former head coach Jeff Lobo resigned from the head coaching spot six games into last season and made $500,000 a year and it is likely Dooley will make more. He was also linked to the Rhode Island coaching position after Dan Hurley took over for UConn, but took a position with East Carolina.
For the Eagles, they may look internally for there next head coach or may look elsewhere. Assistant Coach Michael Fly will be entering his eighth season with FGCU and is definitely one candidate to look out for.
Whoever ends up becoming the new head coach will have its hands full with four seniors leaving in Brandon Goodwin, Antravios Simmons, Christian Terrell and Josh Ko and have two players three players that have entered the NBA Draft in Zack Johnson, Michael Gilmore and Haniff Cheatman, but none of them have hired an agent and can all come back.
However, Johnson has reportedly gotten interest from a bunch of top schools in the county including National Champions, Villanova as well as Miami, Gonzaga, Louisville, Xavier, VCU, Oklahoma, Creghton and Dayton, but will only go as a graduate transfer as he has one year left of eligibility.
Michael Gilmore has also been considering a transfer according to his twitter page where he posted “Talked to God about my life for days and how I see myself and it ended on good terms. I have been and forever will be thankful of the opportunities I have been given through 3 fantastic universities. With that I would like to thank everyone that has helped me along my journey.” He recently deleted the tweet and teammates RaySeah Scott has tweeted out that leaving after two years, but former coach Joe Dooley said last week that he is still on the team.
We will wait and see if any coaches from Dooley’s staff joins him at East Carolina.