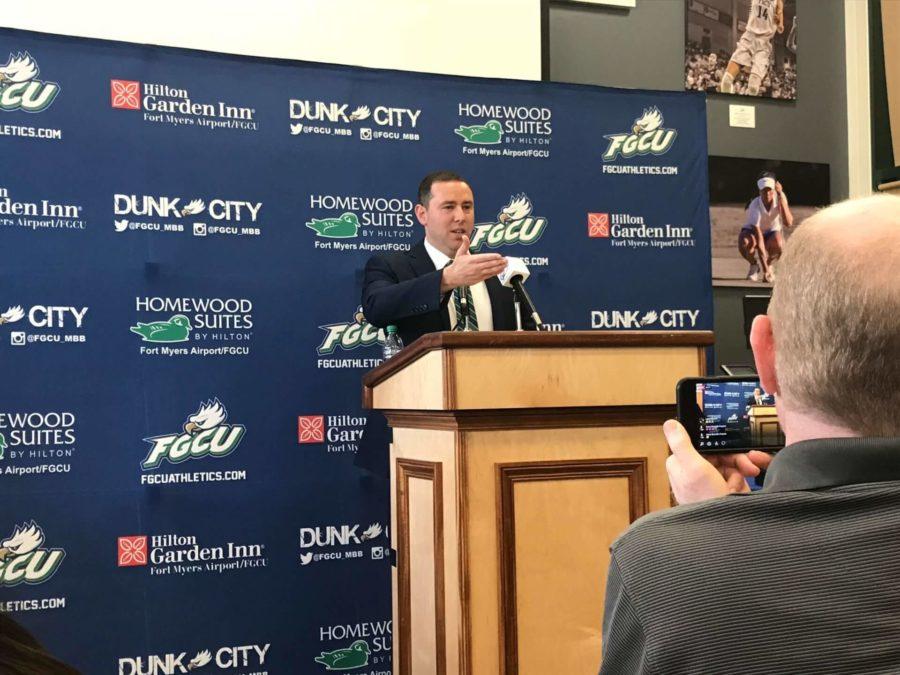 The FGCU men’s basketball team announced that longtime assistant coach Michael Fly will replace Joe Dooley as the fourth head coach in FGCU program history.
“I am excited and humbled for the opportunity that University President Dr. Mike Martin and Director of Athletics Ken Kavanagh have given me to lead this program,” said Fly. “I am thankful to Joe Dooley for the lessons I’ve learned from him the last five years and what we’ve built together. I’d also like to thank [coaches] Andy Enfield, Leonard Hamilton, Bernie Bickerstaff and Happy Osborne for helping put me in this position.”
At a press conference held in the Hospitality Suites at Alico Arena, Ken Kavanagh made the announcement in front of a large crowd of fans, media outlets and players.
Fly was brought in with Andy Enfield and was a part of the 2013 run to the Sweet 16. He spent seven years with the Eagles and spent time as the video coordinator at FSU before coming to FGCU.
Fly was a part of over 150 wins during his tenure, six ASUN Finals, three NCAA tournament victories, three regular season championships and ASUN championships, two NIT appearances and a CIT appearance.
“We are very excited to elevate Michael to this extremely well-earned position,” said Kavanagh. “He has not only been a significant and loyal contributor to two great mentors over the past seven years but has grown to the point that we believe he is the best overall fit for FGCU men’s basketball at this juncture. We look forward to him building his staff, and for them to collectively work with our quality student-athletes to continue the remarkable success story of our program for years to come.”
With much speculation that the Eagles will have a new looking team with a couple of players entering the NBA draft and other players looking to transfer, Fly is not too concerned about the players’ desires and how long they want to be here.
Redshirt senior Zach Johnson has been one of the biggest questions heading into next season as he has been reportedly been linked to schools such as Villanova, Gonzaga, Louisville, VCU, Miami, Xavier, Creighton and Dayton to play as a graduate transfer.
“I haven’t really thought of me, it’s all about Coach Fly,” Johnson said. “I am really excited for him and I have known coach for a long time and I have had some great conversations with him.”
“Being from Kentucky, I think he believes he invented basketball,” Fly added. “Whatever you think about what we are doing, my mom and dad will have every answer. I could not be more appreciative of them.”
Before Fly was able to even talk about basketball, he really wanted to thank his parents for what they have done. He says he may second guess some of his decisions, but nobody l does so then his father who will talk basketball with him all the time. He was also accompanied by his girlfriend, Heather Searcy.
As a big-time recruiter for many years, he has made it his goal to recruit as many from Florida, specifically Southwest Florida, but also made it clear that he is willing to go anywhere to find the right players.
“Their star making might be great, but if they don’t fit our culture, I don’t care what their star rating is.”
Though nothing has been guaranteed, former Miami and VCU transfer Michael Gilmore said yes when asked if he will be back next season.
Another player who came in with high expectations, Ricky Doyle, is looking forward to his final season with the Eagles despite being plagued with injury throughout the season.
“He is a coach you can have a really open relationship with,” Doyle said. “If I have something on my mind, even off the court, he is basically my dad away from home.”
Fly will have to finish his coaching staff, is open to many options and will look along with Kavanagh for the right group.