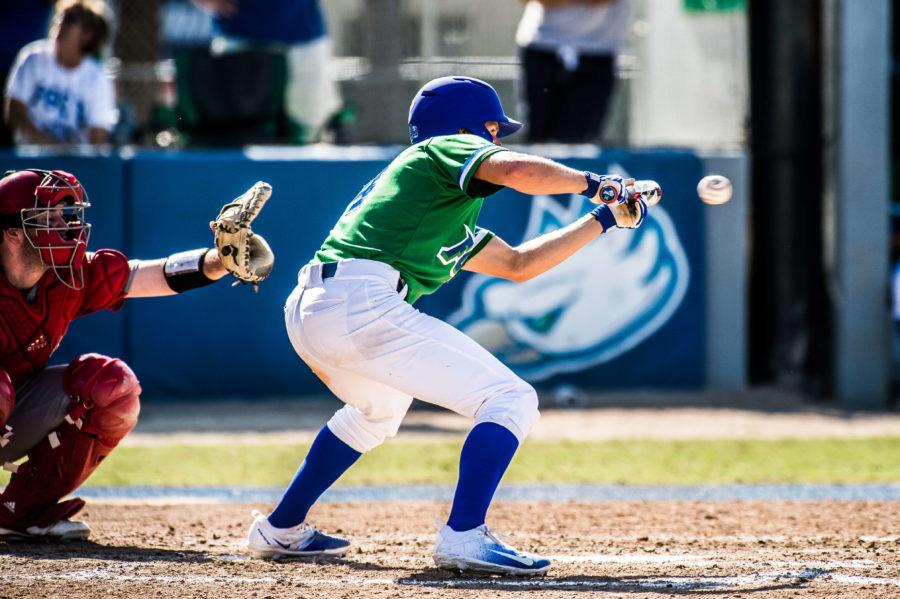 The FGCU baseball team (23-6, 1-0 A-SUN) opened up their portion of the conference with a 9-1 over NJIT (11-11, 1-3 A-SUN). With the win, the Eagles are now 7-0 against the Highlanders. It was redshirt senior Mario Leon and senior Eli Lovell that helped lead the way for the Eagles on and off the field.
“Mario grinded tonight, that was a good grind win,” said head coach Dave Tollett. “His offspeed stuff was on tonight. He didn’t always have his best stuff overall but he grinded it out for us. We had a lot of production from the bottom three spots and Eli stepped up for us. We pulled him into the office and talked to him and told him he needs to put the ball in the air and if he does, this will continue to happen.”
Beginning at the bottom of the first, sophomore Marc Coffers began by reaching first on a throwing error before stealing second. Coffers would then score the first run after sophomore Richie Garcia reached first on a fielding error. After a single off the bat of sophomore Kohl Gilmore, sophomore Alex Brait would hit a single to left, bringing in Garcia for the second run of the game.
In the fourth inning, the Eagles would add two more runs to the score. After junior Eric Gonzalez hit a one-out single and advanced to second on a wild pitch, Lovell would clock a two-run home run to left for his first of the season. The Highlanders would add one run in the fifth inning after Evan Pietronico hit an RBI single, but had very little effect on the score.
Going into the seventh inning, the Eagles added five more runs. After a lead-off walk to Garcia, Gilmore would hit a single and advance to third on a fielding error while Garcia scored the fifth run. Redshirt junior Jay Hayes would follow with an RBI single of his own, driving in Gilmore. After Brait drew a walk and junior Eric Gonzalez hit an infield single to load the bases, Lovelll would send Hayes and Brait home on a bases loaded single before freshman Christian Proffitt added one final run on a groundout, bringing in Gonzalez before the Highlanders were able to score any runs.
Leon would earn his fifth win of the season after throwing five innings, giving up one run on five hits while walking two and striking out eight.
Sophomores Trey Vickery and Sebastian Gruszecki, freshman Tyler Shuck and senior Peyton Gray threw one scoreless inning each. Vickery and Shuck would add one strikeout each while Gray threw three of his own.
Lovell finished the game 4-for-4 with four RBIs. Gonzalez, Brait and Gilmore had two hits each while Coffers, Hayes, Proffitt and redshirt senior Gage Morey had one hit each. Coffers also finished with three stolen bases in the game.
“I felt pretty good at the plate, I felt pretty good at batting practice, and it just carried over into the game,” said Lovell. “A lineup as deep as ours, anybody in our lineup can have a day like I just did, and it was just fortunate that it was my night tonight.”
Redshirt junior Josh Dye will take the mound for game two against NJIT.