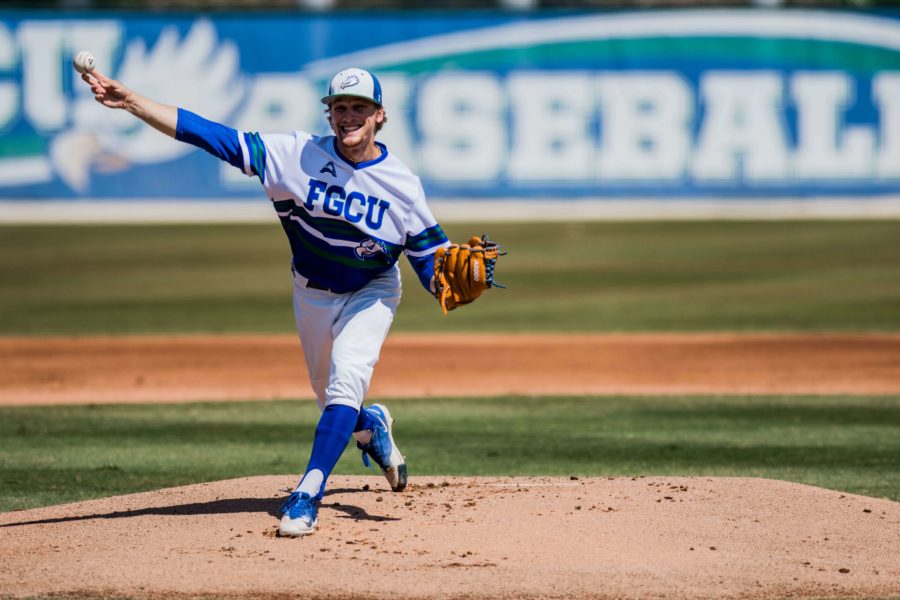 The FGCU baseball team dropped the series finale against NJIT, following a 4-3 loss on Sunday.
The Eagles had a 3-1 lead heading into the seventh inning, but the Highlanders scored a run in the seventh, eighth and ninth innings and came away with a 4-3 win.
Justin Gill made the start and was excellent throughout his six innings before Evan Lumbert struggled a bit in the seventh. Kenton Herring came into the game for a multi-inning save but was unable to get it and picked up the loss.
“We always like to get a sweep, but NJIT is so much better than they were in the past,” said head coach Dave Tollett. “They’re a decent baseball club and we told the team if we didn’t put them away, we were in for a dogfight and that’s what we got. Justin was really good today. This was his best performance by far this year and he pitched well enough for a win.”
Eli Lovell started the scoring with a sacrifice fly which featured Jay Hayes scoring from second base. NJIT got a run back in the next half-inning, but Eric Gonzalez clubbed a two-run home run to right center field to put the Eagles back in front in the sixth.
The game was then tied after a rough couple of innings from the bullpen and then a timely error from Eli Lovell advanced a runner to third after a single. They would score the game-winning run on a single and despite Richie Garcia reaching with two outs in the ninth, Kohl Gilmore struck out swinging to end the game.
Up next, the Eagles will face FAU in a mid-week game in Fort Myers. Lumbert has been the starter the last couple of mid-week games and is projected to make the start. First pitch is scheduled for 6:30 p.m. on Tuesday.