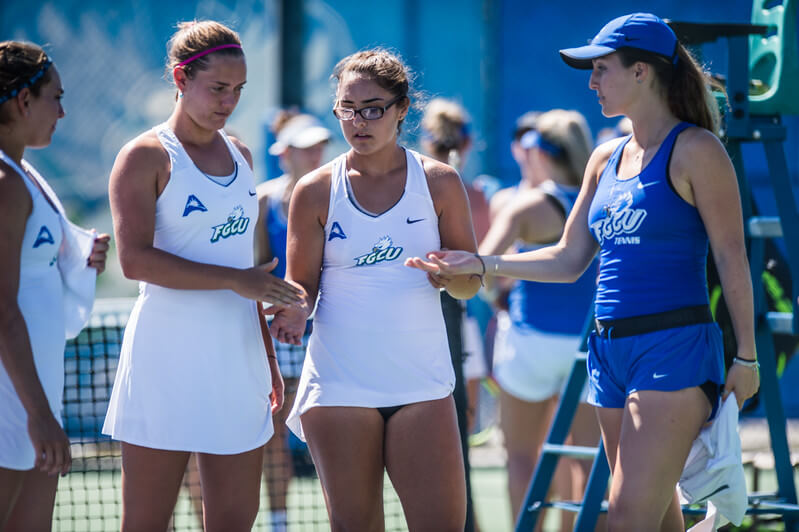 After a second consecutive undefeated ASUN Regular Season, the ASUN handed out 13 different All-Conference and All-Academic awards to the FGCU Women’s Tennis team. Maya Ornberg was named the unanimous ASUN Player of the Year.
Other notable awards given out were to head Coach Courtney Vernon, who won her second straight outright ASUN Coach of the Year following a 6-0 record in conference play.
Playing at No. 2 singles and No. 1 doubles with Ornberg, Julia Ascua was named to the First Team with Ornberg. Nearly the entire Second Team consisted of Eagles as Patricia Villar and Madison Gallegos were named to the team, as well as Bridget Forster and Sofia Perez.
Gallegos was also named to the ASUN Freshmen Team and could have easily been named Freshman of the Year, following her terrific first season with FGCU.
As well as the Eagles have done on the court, they have been nearly as impressive off the court which was highlighted by Juliana Curtis, Ascua and Forster all being named to the ASUN Academic Team.
Ornberg this season was sensational as she went 14-3 (18-12 overall) in dual match play and was perfect in ASUN Play. She won 11 of her final 12 matches, which led the ASUN. In doubles, Ascua and Ornberg earned four wins.
Ascua finished the regular season with three straight wins and was named to the First Team for a third straight year. She tallied 14 wins during the season between fall and spring and holds a perfect 4.0 GPA.
Gallegos galloped onto the scene and moved quickly to No. 3 singles to finish the year tied with Ascua for 14 wins. She won five matches with Villar in ASUN play. The duo finished the season 6-2 as they were placed on the All-Second Team #3 doubles.
Perez earned her first-ever ASUN Regular Season Award as she went 16-8 on the season and ended on a six-match win streak as she went undefeated in conference play. Her biggest win of the season came against UNF as she clinched the last point to secure the top seed for the ASUN Tournament.
Forster also went 16-8 on the season and was one of the four Eagles to go undefeated in conference. She spent most of her time roaring from No. 5 and No. 6 singles and ended the regular season on a seven match win streak. Academically, she made the Dean’s List each of the past two semesters and earned a spot on the President’s List in the fall of 2017. She currently has a GPA of 3.84.
Curtis, like Ascua, has a 4.0 GPA as she was named to the All-Academic Team for the third straight year. She currently majors in business and had six wins during the season in doubles.
Vernon led FGCU to a 10-7 (6-0) season, as the Eagles played one of their most difficult schedules in recent history. They took on ranked teams as well as in-state schools like Miami and FAU with perhaps their biggest win count against Minnesota.
FGCU will head into the ASUN tournament as a heavy favorite and will look to get back to the NCAA Tournament following the ASUN Tournament in Jacksonville this weekend.