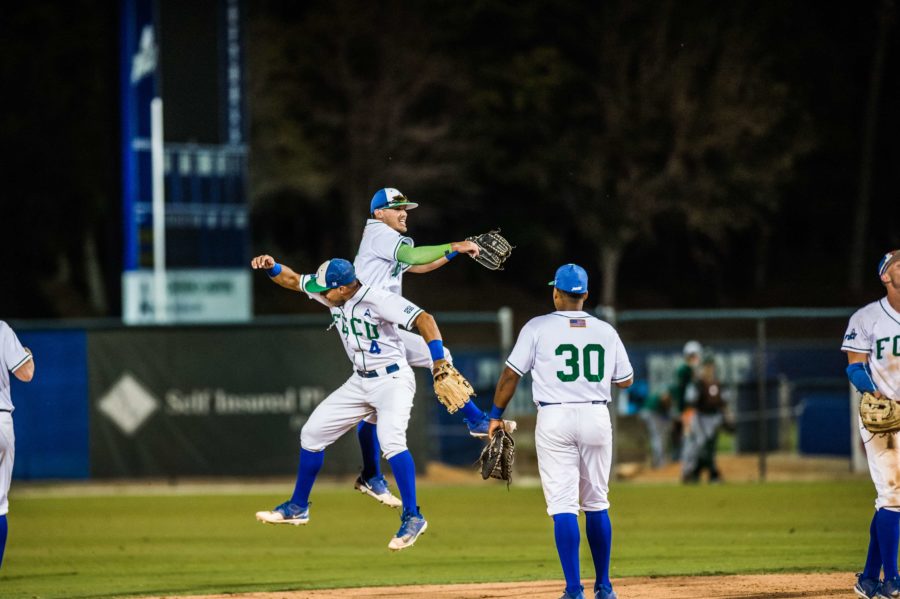 The FGCU baseball team earned perhaps their biggest win of the season on Wednesday night following a 4-2 win over #22 FAU.
Unfortunately for the Eagles, starting center fielder Gage Morey left the game after reaching base in the second inning. Evan Lumbert was on the hill and earned the win, following 5.2 innings and allowing one run and five hits.
“This was a really big win for us,” said head coach Dave Tollett. “They’ve had a really good season and are a very talented ballclub. Lumbert got us off to a strong start and we made some big defensive plays early with those double plays. Offensively we were able to string some hits together and got some big at bats from [Christian] Proffitt and [Richie] Garcia.”
FGCU got off to a strong start with four base runners in the first two innings and despite not scoring in the first, Proffitt drove in the opening run of the game in the second with an RBI groundout.
Proffitt drive in the second run on the game a couple innings later with a two out RBI hit to increase the lead to 2-0. Lumbert already had gotten out of two innings in large part to two crucial double plays and had a shot for a third, but the Eagles were only able to get one out and the Owls scored their first run of the game.
However, Garcia homered just a half inning later to reclaim a two-run lead for his ASUN leading 41st RBI of the season.
After Parker Hamilton relieved Lumbert in the sixth, he set down all four batters he would face. FGCU added another run in the eighth after aggressive base running from Garcia forced FAU to make a throwing error to make it 4-1.
Kenton Herring took over and got the save despite giving up one run in the eighth. Elijah Eusebio came into the game following Morey’s injury and tallied two of the nine hits in game. ElI Lovell also had two hits in the win
The Eagles will be back in action on Friday when they welcome Kennesaw State for a three-game series starting Friday night at 6:30.