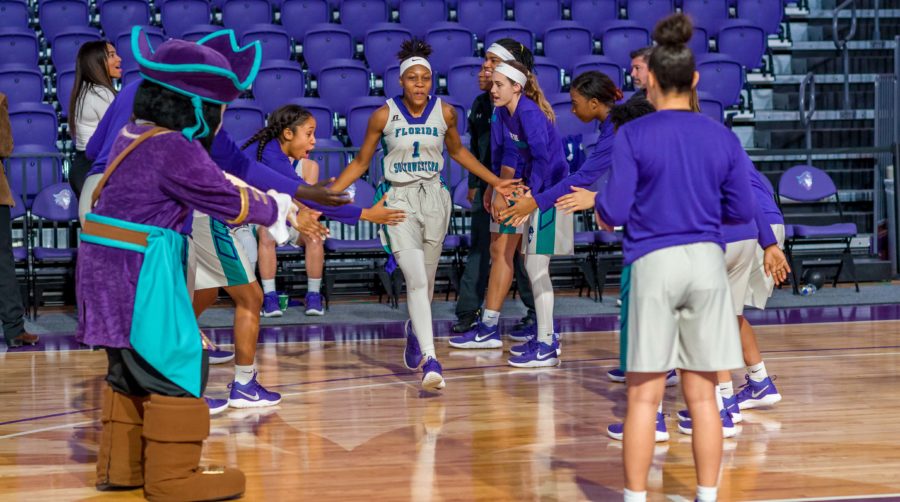 The FGCU women’s basketball team made a huge splash with the signing of Erna Normil, a 5’10” guard of Florida Southwestern State.
Normil played her last two seasons at FSW after playing high school basketball al Lake Worth Community School and was a two time First-Team All Southern Conference Selection. In 61 career games, Normil averaged 15 points and recorded 6.2 rebounds per game.
“We are really excited about Erna,” FGCU head coach Karl Smesko said. “She has good length and is very active. She is a good defender, rebounds well, is good at attacking the rim and can shoot well from 3-point range. She fits very well with how we play.”
Last season with FSW, she scored at least 10 points in 25 of the 32 games, as the team went 26-6 on the season. Normil is only 87 points away from 1,000 in her collegiate career and has already posted 10 double-doubles. In her freshmen season, she scored nearly two more points per game than her her career average at 16.8 points per game.
She also fits right into the Eagles system, as she shot 34.3 percent from behind the arc and shoots just below 40 percent from the field.
“I think FGCU has a great atmosphere,” Normil said of her decision. “The fans are amazing. I like Coach Smesko’s style of play and the coaching staff are great people. I believe this program can help me become a better student athlete.”
Despite the loss of five key players from a team that went to the second round of the NCAA Tournament, Normil is the next member of a highly-talented recruiting class and will be eligible to play right away.
Normil joins Shekinah Guthrie, a 5-10 guard from Centennial High School in Georgia; Ashley Panem, a 5-9 guard from Fairview High School in Colorado; and Tanner Bryant, a 5-11 guard from Miami Trace High School in Ohio.
Also , the Eagles will have Davion Wingate, Keri Jewitt-Giles, and Kerstie Phills next season as they all had to sit out due to the NCAA transfer rules. At some point next season, the Eagles will have Tyra Cox eligible after she transferred from William & Mary during last season.
Also retrieving to the team next season are Lisa Zderadicka, who was a member of the ASUN All-Tournament team after a dominating final few games of the season, as well as the teams leading rebounder, Tytionia Adderly, and starting point guard Nasrin Ulel.