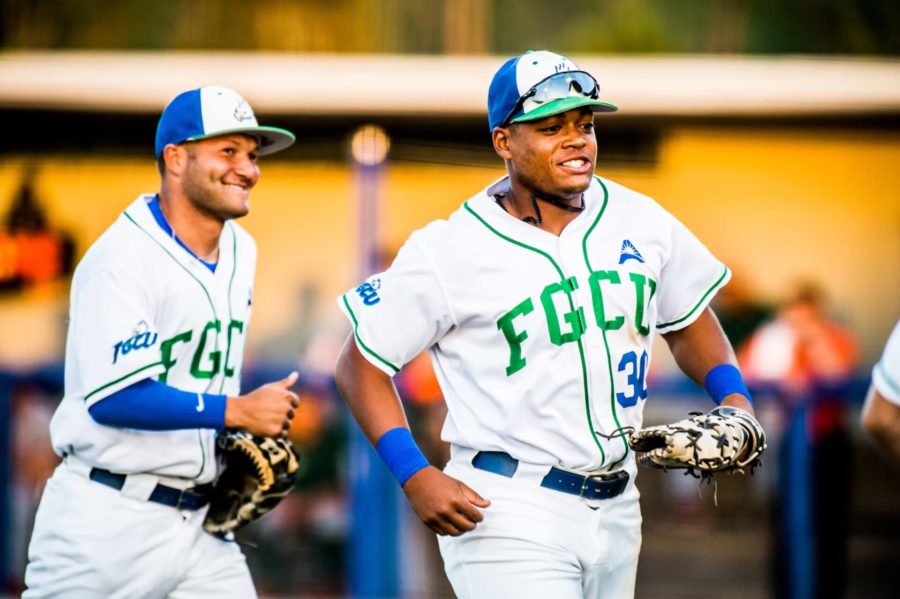 The FGCU baseball team (29-12, 6-5 ASUN) pulled off a 3-0 victory over Kennesaw State (24-19, 10-4 A-SUN) as they continue conference play. With the win, the Eagles are now 24-14 overall against the Owls.
Head coach Dave Tollett sent redshirt junior Josh Dye to pitch against Kennesaw’s Brooke Buckler.
It was a pitcher’s duo between Dye and Buckler as they kept each other scoreless until the seventh inning when the Eagles struck first. After freshman Christian Proffitt was hit by a pitch to lead-off the inning, sophomore Marc Coffers would send Proffitt to second with a sacrifice bunt. After sophomore Alex Brait sent Proffitt to third after grounding out, sophomore Richie Garcia gave the Eagles the lead they needed with an RBI triple, sending Proffitt 90 feet for the first run. The Eagles would add a second run after sophomore Kohl Gilmore hit a single to drive in Garcia.
The Eagles would add one more insurance run in the eighth inning. After senior Spencer Levine reached first on a fielding error, Proffitt would draw a walk, sending Levine to second before advancing to third on a wild pitch. From there, Coffers would smack an RBI double sending Levine home for the third run.
Still on the mound, Dye was able to strikeout Griffin Helms for the third and final out of the game in the ninth. Dye would finish with his seventh win of the season after a four-hit shutout while walking two batters and striking out nine. This was the first shutout of the season for the Eagles and Dye’s second career shutout.
“It’s an awesome feeling to be able to throw a complete game,” said Dye. “Toe (Tollett) was coming up to me telling me I was coming out, I was gonna tell him ‘no I wanted that game’, and I just knew I had it in me.”
“He was really good today,” said Tollett of Dye. “He had to throw behind in the count, sink the two-seam, and his changeup was especially good. But that’s our first complete game in quite some time. He was at 98 pitches going into the final inning so we had to run him back out there. He averaged a strikeout per inning but the key was, we needed this win. Josh knew we needed this and that’s what makes it more special for us.”
Buckler would earn his second loss of the season after throwing seven innings, giving up two runs on seven hits while walking one and striking out three.
Ryan Kennedy came in for Buckler for relief throwing one inning, giving up one run (unearned) on one hit while walking one batter and striking out two.
Eight of the nine batters in the lineup had one hit each: Coffers, Brait, Garcia, Gilmore, senior Eli Lovell, redshirt junior Jay Hayes, Levine and Proffit.