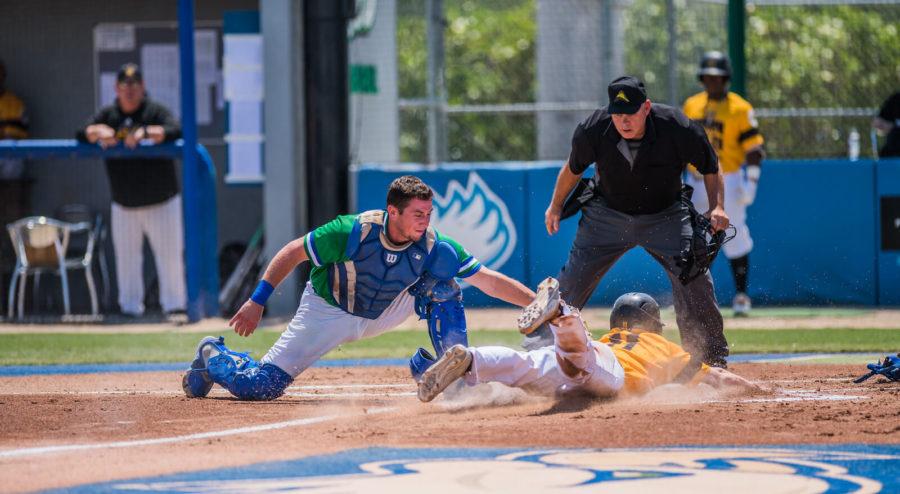 Behind a Richie Garcia three-run home run in the seventh and a walk off double in the ninth, the FGCU baseball team finished off a series win over first place Kennesaw State.
The Eagles trailed 2-0 heading into the seventh inning, but that changed as Garcia launched his seventh home run of the season to give FGCU their first lead of the day. Just two innings later, Alex Brait singled with two outs and then Garcia came through with the walk off as he nearly cleared the fence in left field.
“I took a look at my dad and he pointed right back at me and said this is your time,” Garcia said. “Right then and there I knew I had to do the job.”
Justin Gill made the start for the Eagles and was spectacular, despite giving up two runs in the first inning. He went seven innings and allowed only those two runs and seven hits and was in line for the win, but the Owls tallied a run in the ninth off Kenton Hering.
“It was a rough first inning, but I knew my team had my back,” Gill said. “I knew we would finally get some runs going. I knew if I pitched the way I was supposed to, we can easily get the win.”
The Eagles had chances in the first after a pair of base runners and again in the fifth after a pair of errors from Kennesaw State, but could not get on the board against Jake Rothwell. Fortunately for the Eagles, Rothwell left in the fifth inning after the Eagles made him work.
The deficit could have gotten worse, but Eli Lovell was able to cut down a runner at the plate as he fired home to Spencer Levine for what was one of the first turning points of the game.
Marc Coffers and Brait each singled before Garcia homered and Sebastian Gruszecki retired his only batter in the eighth inning. Hering retired his two hitters in the eighth and gave up a two-out hit which tied the game, but Garcia’s hit in the ninth ended it for the team’s 30th win.
“I think it is always a good matchup with Kennesaw State,” said head coach Dave Tollett. “It was so tight. We could have swept. We could have been swept. We made some plays the last two days.”
The Eagles will have a mid-week game on Wednesday against FIU before they remain home for a second straight weekend series as they host UNF.