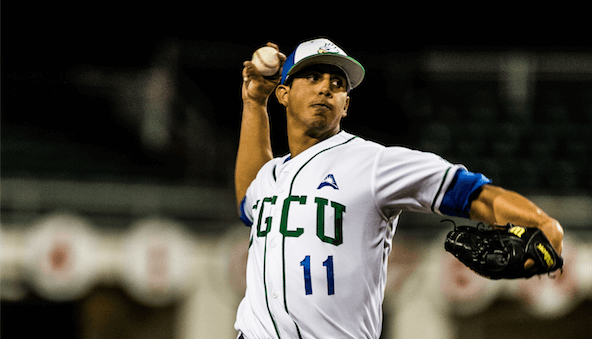 FGCU’s Department of Athletics has released its monthly academic honorees for April and May. The April honorees are Maja Ornberg of women’s tennis and Grant Renegar of men’s golf, with softball’s Racquel Fournet and baseball’s Mario Leon representing for the month of May.
Ornberg, who was recently named ASUN’s Player of the Year for women’s tennis, landed a spot on the Dean’s List for the spring semester with a 3.74 GPA in Communications.
On the court, the Swedish native finished off this past season #1 for the Eagles (12-1) and was one of three Eagles to reach double-digit wins for an overall record of 15-3 in dual action. Ornberg also went 6-0 for ASUN and, with the help of fellow teammate Julia Ascúa, collected four doubles wins to help FGCU achieve it’s second straight ASUN regular season title.
Renegar has an overall GPA of 3.5 as he pursues a degree in Integrated Studies, also landing a spot on the Dean’s List this past semester.
The Mississippi native was one of only three seniors to play in all 11 golf tournaments for the Eagles, carrying a team-best 74-stroke record over 29 rounds. Renegar posted four top-10 finishes of the year, making him tied for the 14th most in single-season program history.
Fournet, who was recently named ASUN’s All-Academic honoree for the second time, carries a 3.55 GPA in Biology and has landed a spot on the Dean’s List three times.
Hailing from Windermere, Florida, Fournet was named a First Team pick for the second time in her career this month and was named an all-conference selection for the third year in a row. The junior started all 56 softball games this season and had a team-leading batting average of .361. Fournet also led the Eagles in hits (60), doubles (14), and RBI (33). She was also named ASUN Player of the Week twice this spring.
Leon carries an overall GPA of 4.0 as he pursues a masters of public administration after achieving his bachelor’s here at FGCU. He also landed a spot on the Athletic Director’s Honor Roll for each of his eight semesters as an undergrad.
The Naples native was named the department’s co-Scholar-Athlete of the Year, earning the same honor for ASUN baseball and making history as the first-ever FGCU baseball player to do so. On the field, Leon had his best season with the Eagles. He matched a career-high five wins and lowered his career-best single-season ERA to 3.05, a full point below his previous record. He also struck out a career-high 83 strikeouts, 20 more than his previous record.
The FGCU Athletics Communication Office teams up with the Athletic Academic staff each month to choose one male and one female FGCU athlete to name the FGCU Athletics Scholar-Athletes of the Month. The athletes honored will have not only performed superbly on their respective teams, but have outstanding overall academic success.
UPDATED: June 4, 2018 10:40 PM