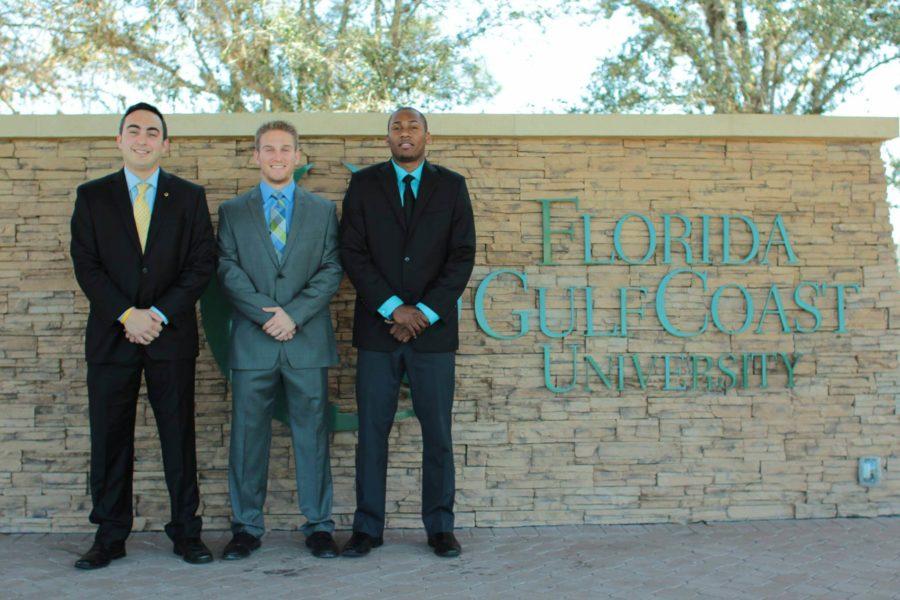 Domenic Volpi and Cory Mentzer are the new president and vice president of the student body of Florida Gulf Coast University.
The candidates who ran as the For the Eagles party won with 1,005 votes to the Action party’s 626. The disqualified HOUSE party received 29 votes.
“We’re definitely in shock,” said Volpi in a phone interview. Volpi and Mentzer went to the official announcement in the Cohen Center atrium Thursday night, surrounded by friends and fraternity brothers. “It was a cool and exciting experience.”
It was the first night of what will be a month of hard work before Volpi even takes office. “A lot of past presidents have already reached out,” Volpi said. “I think the main thing is learning new ideas and being open to talking to different people. It’s gonna be a busy month.”
For the Eagles ran for election on a unique platform. The party members spent only $240 on their entire campaign, in an effort to keep in touch with what Mentzer called “the average student” in the debate last week.
“We believe the average student cannot spend thousands of dollars on a campaign,” Mentzer said at the debate. “We’re truly trying to change how student elections go, how campaigning goes and how student government is run.”
According to Volpi, his first order of business in office will be “an attitude change.”
“What’s happened in the past has happened in the past,” Volpi said. “We’re ready to move forward in a positive way. We are not going to lose focus on why we ran − we will always be students for students.”
Michael Danis of the Action party was elected treasurer over For the Eagles candidate Romel Durandisse and HOUSE party candidate Sean Kempton. Even though they did not run together, Volpi is not worried about getting along with Danis.
“We’ve been good friends for a couple of years now. It’ll be nice to work with someone that I’m comfortable with and that I trust,” the president-elect said.
Finally, Volpi would like to thank the voters. “We are very humbled and very proud. Thank you to the students who have gracefully elected us to represent them … we’re going to try to have a great year.”