Volleyball comes out on top in first series of season 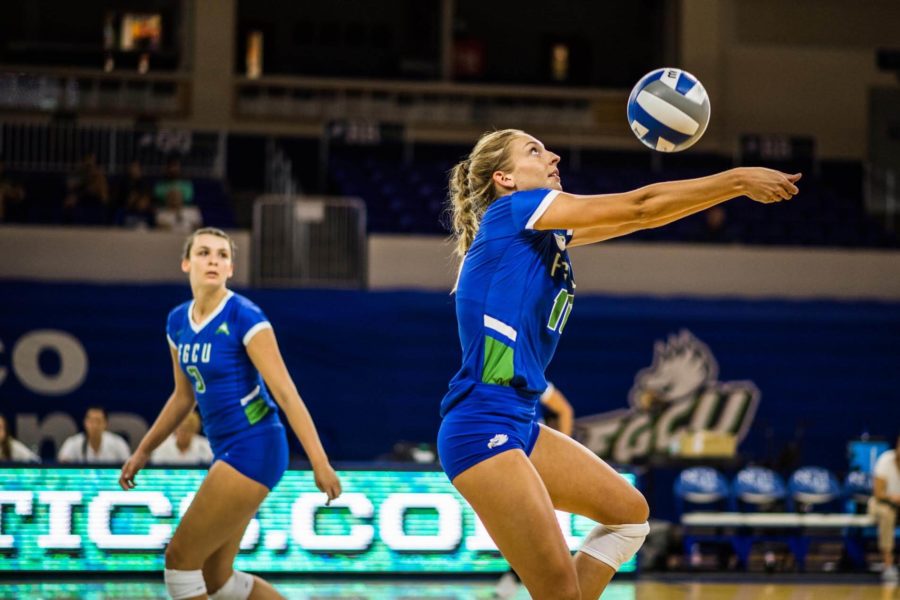 EN Photo by Brad Young // Chelsey Lockey goes for a bump during a game.

The FGCU volleyball team traveled to Miami to compete in the Sunshine State Challenge last weekend, winning two of three games played in their first series of the season.
The Eagles played two matches Friday night and one match Saturday morning. They came out on top 3-0 against FAU but suffered a 1-3 loss against UCF. The teams third and final game against UM also resulted in a spectacular 3-0 win on Saturday.
The opening game against FAU saw a combined effort from the entire FGCU team. Sophomore Cortney VanLiew tied her career-high kill record with 17 throughout the first game, with assistance from freshman Chelsey Lockey to result in an 18-15 lead. The duo of senior Amanda Carroll and junior Daniele Serrano finished the game with four kills in a row to secure a win.
The second game started off with a 3-1 lead by FGCU and continued to be a close game until an attack error by FGCU gave FAU a 12-10 lead. An additional attack error gave FAU the upper hand with a 19-16 lead until a 4-point run gave the Eagles a one-point lead.
After a bit more back and forth between both sides, VanLiew started a 4-0 run to win the set.
With the third game came a match-high 17 ties and eight lead changes. A bit of back-and-forth play by both teams gave FAU a 17-14 lead, but then FGCU brought the offense and scored 10 points by successful attacks.
During the same game, VanLiew had her 19th career match with at least 10 kills and Serrano had her ninth career double-digit kill performance with 10.
Immediately after a match win against FAU, the Eagles faced the Knights when they played UCF in their next match of the season. While FGCU’s offense certainly performed, UCF fought back and pulled off a win in four sets.
Senior Amanda Carroll saw her first double-double of the season during the match, while sophomore Cortney VanLiew recorded her 20th career game with at least 10 kills. Freshman Dana Axner led the Eagles in defense with 20 digs with the assistance of senior Maggie Rick, who led the team with 32 assists.
After a win and a loss on Friday, FGCU faced Miami on Saturday morning to finish up the season opener. With a 3-0 win, the Eagles made program history with their first road win over a Power-5 school.
Miami started off set one with six of the first nine points of the match but was no match for Carroll as she produced back-to-back kills to build momentum. From there, senior Sharonda Pickering produced a kill of her own to tie the score 7-7.
Junior Giovanna Borgiotti produced a kill shortly after t give FGCU a two-point lead, giving the Eagles the momentum to go on an 8-1 run, which led to a 20-12 lead to secure the set.
The second set saw less action as the Eagles opened up a 15-11 midway due to back-to-back kills from Burnam, a dump kill from Rick and a kill from Carroll. Borgiotti and VanLiew then produced two sets of back-to-back kills to raise the score to 21-14. The Hurricanes couldn’t keep up after that, as Carroll finished the game with a kill.
Miami gained momentum in the opening of the third set, going on a 9-3 run early on to give them a 10-5 lead. The Eagles saw three attack errors and a service mistake during this run, but VanLiew brought back the momentum with a kill.
From that point on, FGCU produced a 5-0 run to tie the score at 10. Miami fought back with six of the next nine points and after a short timeout by FGCU, Miami continued their momentum to take a 19-16 lead.
The Eagles continued to fight, however, feeding off a service error by Miami to produce seven of the next eight points. VanLiew and Ryan combined to produce four kills to give FGCU the power to secure the match.
Next, the Eagles will travel to Albuquerque, New Mexico to compete in the Lobo Classic this weekend. There will be a double-header against New Mexico State and New Mexico on Friday, August 31, followed by a match against Eastern Kentucky the next afternoon, September 1.