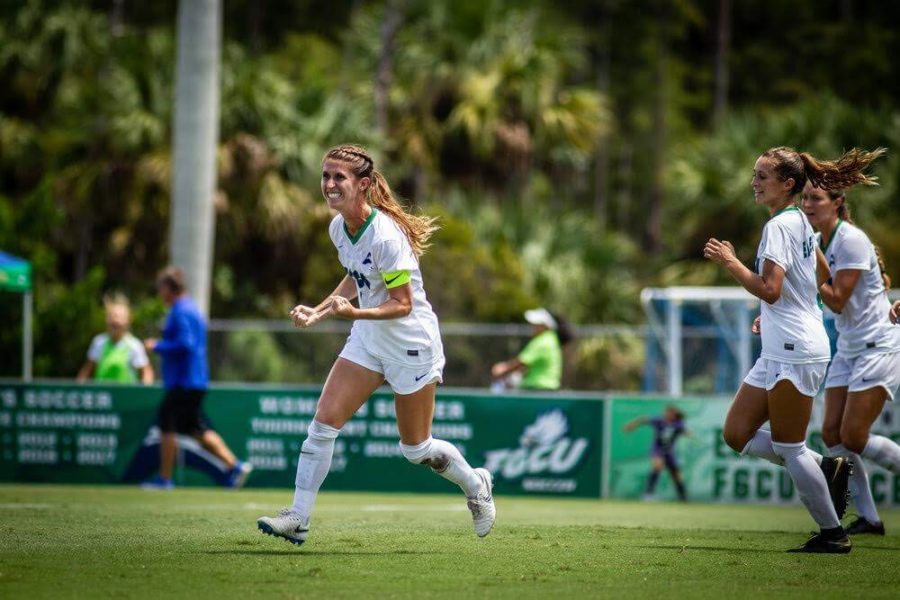 EN Photo by Bret Munson // Senior Holly Fritz celebrates her second goal of the game against the Michigan Wolverines. The Eagles came out on top 3-2 to secure a win.

In a fight to beat the University of Michigan, the FGCU women’s soccer team secured a win to give them their first 4-0 record start since 2007.
Offense led the game on both sides, with 12 shots from the Eagles and 11 from the Wolverines.
The Eagles started off the game with an aggressive approach, keeping the ball within range of Michigan’s net for the first minutes. In the third minute, junior Evdokia Popadinova managed to get a shot in, but some foul play by the Eagles led to Michigan taking the upper hand as the first half continued.
Fueled by their advantage, Michigan found the net in the eighth minute after a corner kick put them in the right position.
However, this upper hand didn’t last long as Marjorie Boilesen set up Holly Fritz for a goal to put FGCU on the scoreboard in the 15th minute.
With an even score on the board, Michigan pushed its offense in an attempt to receive the upper hand. This attack earned the team two shots on goal within three minutes by Reilly Martin and redshirt senior Taylor Timko.
The Wolverines couldn’t find the net before the Eagles, however, when Popadinova gave the Eagles their second point of the afternoon with a free kick to reach the net in the 35th minute.
The remainder of the half consisted of a point for each team, Michigan’s with 6:20 left on the board and FGCU’s just two minutes after. Sarah Stratigakis of the Wolverines scored the goal for her team, while the Eagles’ Holly Fritz returned to make the score 3-2 at the half.
The second half of the afternoon proved to be just as dirty as the first, with the first minutes of the second half consisting of five fouls between the two teams and a yellow card thrown on Michigan’s Hailey Neumann.
Both teams also saw many opportunities at the net, resulting in some spectacular saves on both sides of the field.
A penalty kick for FGCU led to a double save by Michigan goalkeeper Izzy Nino, while FGCU goalkeeper Melissa Weck saw two saves within a span of two minutes shortly into the second half.
In the final minutes of play, the Eagles ran down the clock and kept Michigan away from the net offensively in order to secure a win.
“We talked about the opportunity this was for our team before the game” Jim Blankenship said.  “Our kids worked their tails off this week and were rewarded for it.  We hope as long as they continue to go out and put up results, we will get the respect that they deserve.”