Eagles scoreless in draw against Flyers 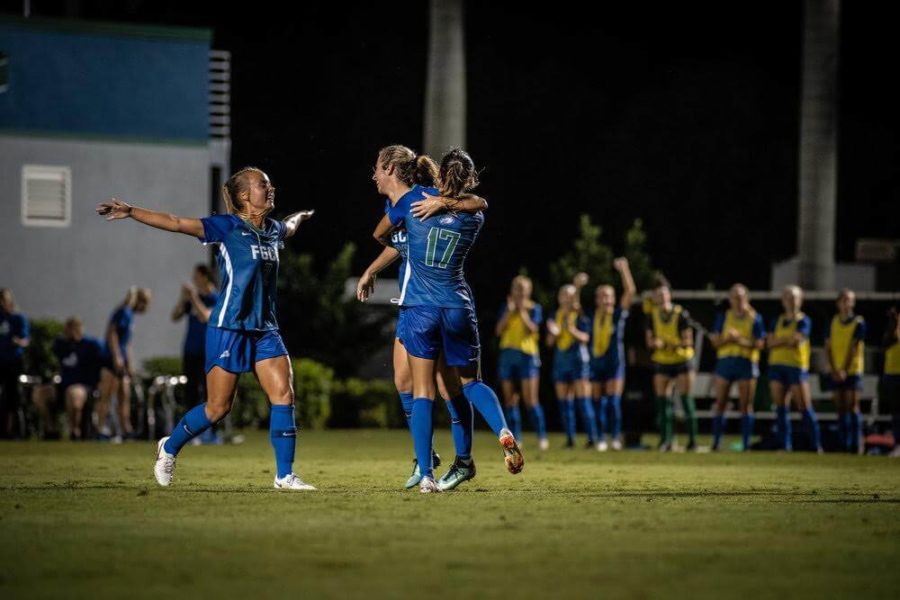 FGCU women’s soccer played Dayton on a Sunday afternoon game that saw many shots and shots on goals, but just as many saves.
This draw brings the Eagles to a record of 5-0-1 and the Flyers sit at 4-2-1.
FGCU was the first to try and strike with a shot on goal from Hope Van Wagner, sophomore. 30 seconds later, fellow teammate Evdokia Popadinova, Junior, attempted a shot, but missed wide. Those would be the only two shots the Eagles would attempt in the first half
Ten minutes later, Jordan Pauley, Junior, attempted a shot that missed high, but that set the precedence for Dayton as they would continue to put pressure on keeper Melissa Weck, junior.
Quincy Kellett, senior, attempted a shot in the 26th minute going wide. Following her, Magalie Depot, freshman, went for a header that missed wide. Morgan Henderson, sophomore, would also miss wide in the 34th minute.
That was the last shot in the first half.
Quickly in the second half, the Eagle’s Majorie Boilesen, junior, tried for a header, but missed.
In the 49th minute, Keagin Collie of Dayton would pick up her first yellow card, and then again in the 53rd minute, she picked up a red card leaving the Dayton Flyers down a player for the rest of the game.
In the second half, the Eagles would come to play some heavy offense as they attempted three shots. The first one being supplied by Zoey Spitzer, sophomore, who missed a header wide. Holly Fritz, senior, would also attempt a header that missed wide. Following those shots, freshman Ashlee Brentlinger attempted a shot that went wide.
Pauley would attempt two corners for Dayton that didn’t amount too much thanks to Popadinova who blocked the second one and then had a shot of her own that missed high.
Brentlinger also had some defensive awareness with a blocked shot of her own.
The game would go into double overtime with neither team being able to get more than a shot or two off.
FGCU had 13 shots in total with four of those being shots on goal while UD only had six with one being a shot on goal.
The FGCU Eagles will take on the FIU panthers who are 0-6 on Thursday Sept. 13 at 7 p.m. in Miami where they will look for their sixth win of the season.