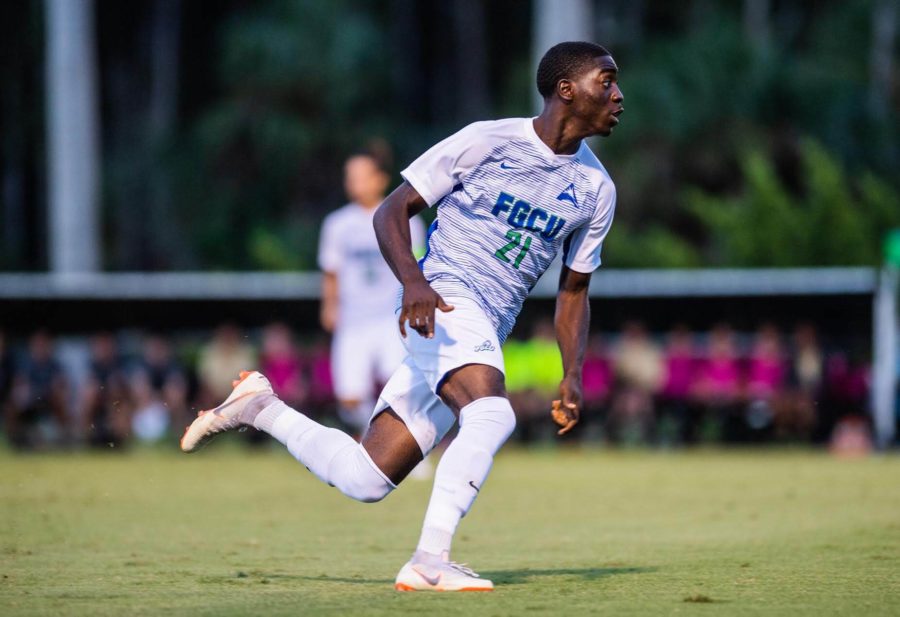 On the road, FGCU men’s soccer picks up a 2-0 win against Georgia Southern.

With the win, FGCU moves to [2-2] and GS moves to [2-1-1].
The ball didn’t move much in the first 35 minutes of play until a corner kick by Kareem Riley, sophomore, touched the keeper’s gloves as Kamar Marriott, senior, tapped it in for the score moving the game to 1-0.
The 1-0 advantage closed out the first half of regulation.
Georgia Southern played major offense in the start of the second half as they shot three attempts on goal with no luck. Keeper Gustavo Vasconcelos, sophomore, was locked in and didn’t let a single shot go by.
The green and blue was able to add an insurance goal making the lead 2-0. Shak Adams, Junior, set up the shot 18 yards out finding Joao Burti, Junior, who headed the shot five yards out.
FGCU zoned in on defense late in the second half allowing one corner kick and one shot on goal late in the 69th minute.
“To knock off an undefeated team at their home and play the way we did in the first half was a significant improvement. Getting contribution from the entire squad tonight was also encouraging and this was a credit to the entire team and I’m very proud of them,” said head coach Jesse Cormier.
FGCU only had seven shots all games with four shots on goal.
GS had only four shots in the first half but had 13 shots in the second half. Out of the total 17 shots, they only had five shots on goal.
FGCU also had some foul trouble having 14 fouls in the game to Georgia Southern’s ten. Both teams also picked up two yellow cards each.
Up next for FGCU, they look to take on I-75 rival, USF. Bulls head coach, and former Eagle soccer program founder and coach, Bob Butehorn, will be returning to the nest for the first time since coaching in 2016.
The game will take place on Saturday Sept. 15 at 7 p.m.
USF looked to have a strong campaign in 2018 after having a 6-6-4 record in 2017. They have struggled to put W’s on the board going 1-4 after playing three teams in the top-25.