The everlasting abandonment of Flint 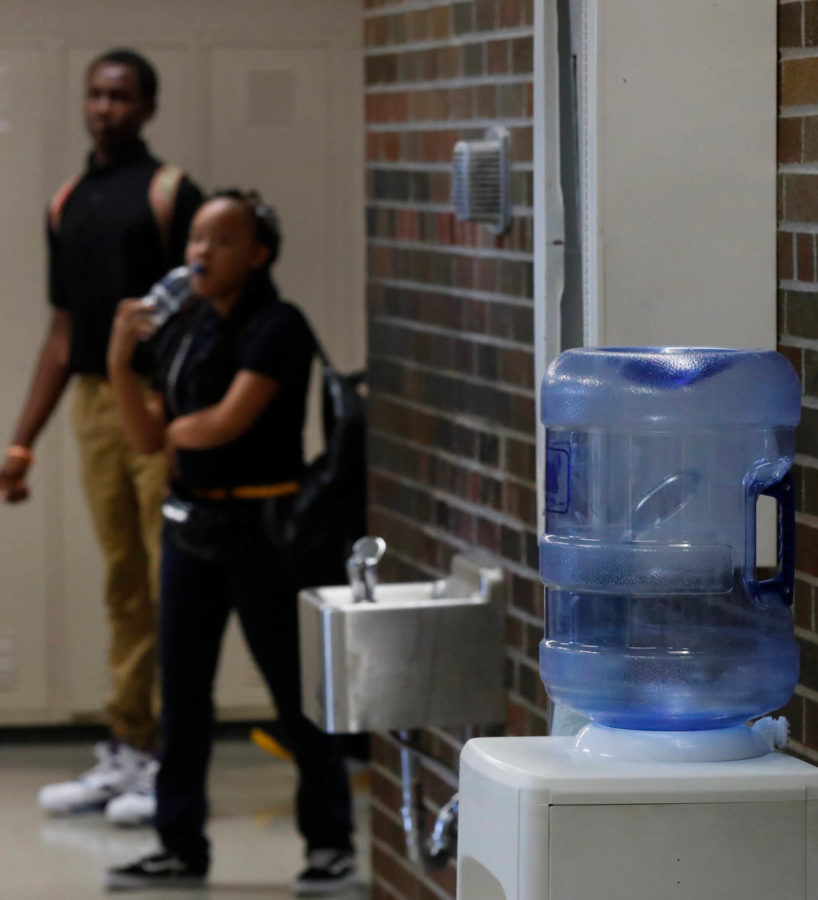 Students walk by a water fountain and water cooler at Noble School in Detroit, Tuesday, Sept. 4, 2018. Some 50,000 Detroit public school students will start the school year Tuesday by drinking water from coolers, not fountains, after the discovery of elevated levels of lead or copper — the latest setback in a state already dealing with the consequences of contaminated tap water in Flint and other communities. (AP Photo/Paul Sancya)

Remember a few years ago, 2014 to be exact, when you turned on the TV, and there was suddenly extensive news coverage of the water crisis in Flint, Michigan? Reporters wore convincingly sympathetic expressions as they interviewed and received testimonials from residents of the predominantly black Flint community, whose water suddenly smelled, looked and tasted funny.
It was only a matter of months before a group of doctors publicly urged Flint to change their water source. Why? According to the Associated Press, there were repeated cases of lead detected in children’s blood.  Mothers on the news cried because they couldn’t properly bathe or cook for their kids, while other residents expressed sheer anger or disappointment in the government.
For a while, Americans couldn’t escape this coverage. There were nationwide protests and fundraisers in attempt to aid those in Flint. However, as time passed, the issue became less and less visible. There was a full-blown crisis, and most Americans forgot that it ever happened.
This whole fiasco began in April 2014 when Mayor Dayne Walling cut Flint’s water supply from Detroit, where it had been sourced for 50 years and switched it to the Flint river. Of course, this action was an attempt to save money. Flint’s 100,000 residents were told the move was temporary while the city transitioned to a newer regional system.
So, here we are, four years later – surely things have gotten better for Flint, right?
Wrong, actually. In June of last year, Flint experienced a deadly outbreak of Legionnaires’ disease that was directly related to the water’s low chlorine levels. Michigan’s Health and Human Services Director, Nick Lyon, was charged with involuntary manslaughter.
So, in case you don’t get it, as recently as June of last year, people were still getting sick, and even dying as a result of using Flint’s water. Where was all the news coverage? Where were the viral Go-Fund Me’s? Instead, our senses were overloaded with updates about Trump’s disaster administration, Amazon taking over Whole Foods and how well the Wonder Woman movie did in the box office. All far more important things, clearly.
As we were nice and distracted, people continued to get sick and unsuspecting Flint residents kept dropping dead. Nothing was being done.
When was the last time you heard President Trump speak on the water crisis? The only time that I can recall is when he traveled to Flint back in 2016 and appropriately broke the ice by saying, “It used to be cars were made in Flint, and you couldn’t drink the water in Mexico. Now, the cars are made in Mexico and you can’t drink the water in Flint.”
How diplomatic and presidential, right? Perhaps even more diplomatic and presidential is the fact that he hasn’t breathed a word about Flint’s water situation since then. As a matter of fact, he visited Michigan back in April, where he gave an 80-minute speech and failed to mention the ongoing water crisis right down the street.
Why is America choosing to blatantly ignore such a dangerous situation? The residents of Flint are literally being poisoned and left for dead in their own community with zero visibility or acknowledgment from anyone.
It is very hard to believe that it has nothing to do with the fact that Flint is a predominantly black area. Inner cities have been forever swept under the rug by the federal government and the media, and Flint is no different.
These entities are quick to point out how poverty stricken and dysfunctional areas like Flint are, criticizing them for gang violence and such. However, by ignoring these areas in crucial times of need as people are struggling to get by or even losing their lives, they’re committing their own version of violence.
How hard would it really be for the federal government to investigate Flint’s water crisis? A few water tests here, some funding there and the city would be well on its way to recovery. People would stop dying and children would stop getting sick. But, as long as the government continues to see inner cities as unimportant ghettoes, nothing will ever be done, and the crisis will continue to worsen in the shadows.
Nice, America!