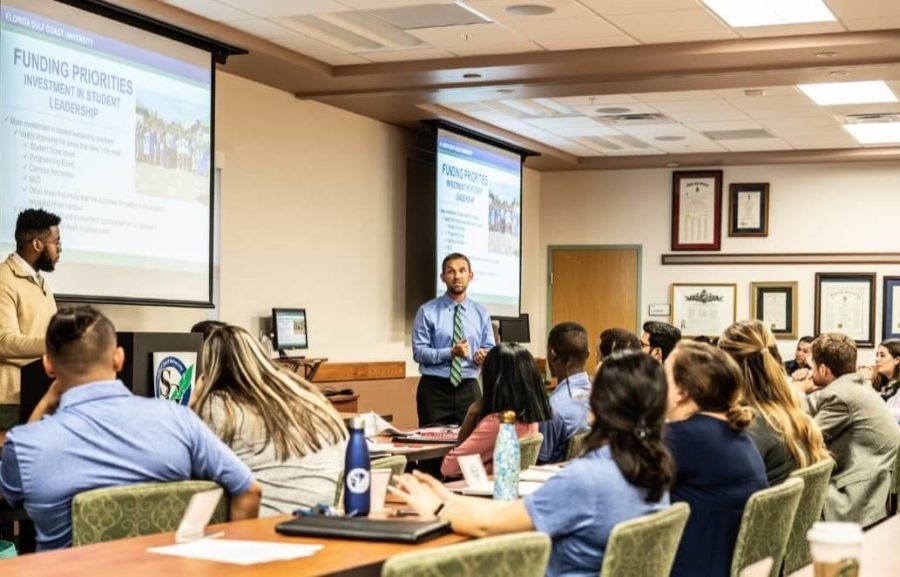 Nearly $2 million in Student Government funds remains unallocated from a budget of approximately $4 million.
Associate Vice President of Student Engagement Brian Fisher addressed the large surplus in a Senate meeting, attributing it to a “variety of reasons” including reserves, students paying for more courses and guidelines on money expenditures.
Fisher proposed potential strategies to spend the money and urged senators to focus more on existing programs, student involvement and funding more positions.
Fisher mentioned funding priorities, including the university’s campus recreation center, campus life (like registered student organizations) and multicultural student services.
“This government is very cautious in funding full-time positions – we need to evolve,” Fisher said. “We need to change. There are key critical areas where we need more people and it starts with a full-time staff.”
Senator Garrette Parsons voiced her concern regarding space for new staff members. Fisher said new staff positions would not be considered without prior space accommodations.
In addition to positions, Fisher also suggested allocating extra funding to student leadership as a means to incentivize students to join existing organizations.
“It drives me nuts that the answer is to ‘give them service learning hours’– stop,” Fisher said. “You all have $4.2 million. Stop. $4.6 million if you follow my plan. Take this money, put it in a full-time staff and put it in student leadership.”
The estimated budget for the 2020 fiscal year is about $4 million, according to Fisher. One method to improve spending, Fisher said, is to over allocate A&S Fee appropriations to reduce the fund balance over time.
This method would allow Student Engagement to monitor enrollment and credit hours and develop future strategies for upcoming Student Government leaders.
Every year the university allocates A&S Fees to Student Government.
A&S Fees come from tuition. Students pay $11.24 per credit hour in A&S fees, and Student Government is responsible for allocating those fees to registered student organizations and departments.
RSO’s and departments are then able to request money by submitting a bill through Senate, a process that can take anywhere between six to eight weeks, according to the RSO treasurer training manual.
Though potential strategies for funding expenditures would not impact this fiscal year, Fisher says his proposition – if approved by Student Government – would set the framework for the 2020 fiscal year.
“I wanted to develop a long-term strategy that would enable that body to allocate that money in an effective way to best benefit students as opposed to developing a randomized strategy that tackled non-recurring projects,” Fisher said. “We need more resources dedicated to staff – both full staff and student leadership staff positions to be able to do more programs and activities for our students.”
The appropriations process begins in October for the 2020 fiscal year.