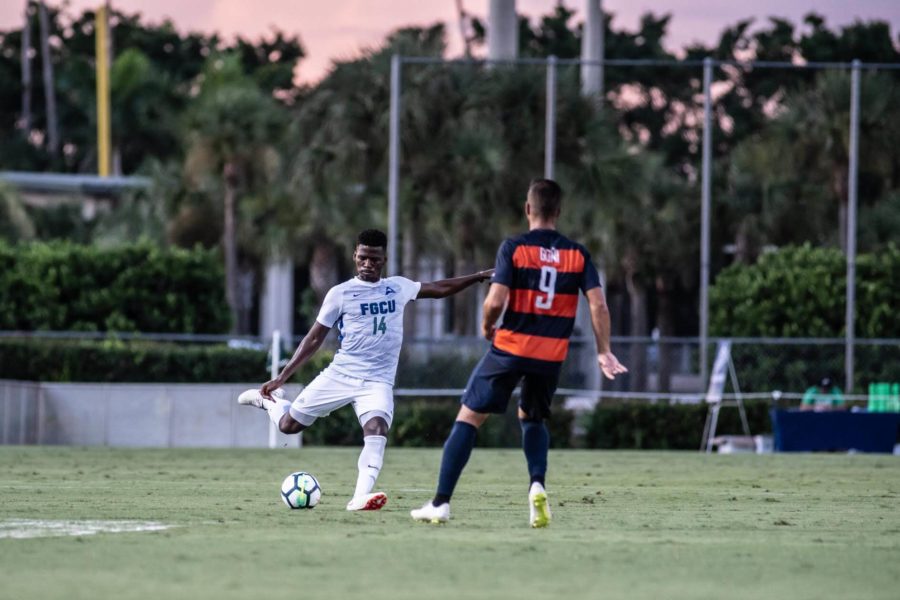 The FGCU men’s soccer team received a draw after a double overtime against the Cal State Fullerton Titans in the game on Wednesday.
The action started early, as Cal State Fullerton’s Bass Sarr put a shot on goal early in the 1st minute, but FGCU goalkeeper Gustavo Vasconcelos made the save to keep the game even. Less than a minute later, Kareem Riley of FGCU put a shot on goal that missed high.
In the 3rd minute, FGCU had a corner that didn’t amount to much. The ball stayed mid-field until Cal State was awarded two corner kicks in the 13th minute.
During the 17th minute, Sarr put another shot on that missed wide left. Fullerton would put on another shot by Israel Gonzalez that missed high in the 23rd minute.
FGCU’s Jordan Lue eventually found possession of the ball in the 25th minute and managed to find the goal, but a save from Titans goalkeeper Paul-Andre Guerin stopped the Eagles from receiving the point.
After being subbed in the 30th minute, Cal State’s Zico Bailey put a shot on goal that was saved by Vasconcelos.
In the 39th minute, the Titans earned a yellow card on Edward Salazar. The turnover created a chance for FGCU’s Ivan Rosales that missed wide. That shot would be the last of the first half.
The Titans went out hard to start the second half, with Oscar Flores of Cal State getting a shot in less than a minute into play. Minutes later, in the 48th minute, Kamar Marriott of FGCU would put a header shot that missed high.
The scoreboard remained empty until the 59th minute, when FGCU’s O’Vonte Mullings found Shak Adams near the net. Mullings passed to Adams, who then dodged Cal State’s defense to score from five yards out. This marks Adams’s fourth goal and Mullings second assist of the season.
In the 60th minute, Cal State picked up its second yellow card of the match on Gonzalez. The Titans put a shot on goal by Samuel Goni that was blocked in the 62nd minute.
Just one minute later, the Titans found themselves on the wrong end of another yellow card pulled to Sam Molz, giving them their third and final of the game. Cal State would also pick up three fouls shortly following.
The Eagles then had two runs down the pitch that were called offsides in 68th minute. Riley picked up a yellow card in the next minute.
In the 75th minute, Christian Pinzon of the Titans missed a shot wide followed by another shot in the 80th minute by Alex Juarez that missed wide as well.
Cal State continued to put shots on, as Robert Coronado missed a shot high in the 81st minute. In the 84th minute, Donavon Wilson missed high. Salazar missed a header wide left in the 88th minute.
FGCU would regain possession as Mullings put a shot on goal that was saved by Guerin. Moments later, CSF gained possession late in the 89th minute and put a shot on goal by Wilson, who was assisted by Bailey and Salazar to tie the game taking it to overtime.
While neither team was able to score a goal in overtime, both put shots on goal. CSF put five shots on and FGCU put two shots on.
Cal State lead the game with shots and shots on goals, putting 18 shots on and seven on goal. FGCU had six saves in total and CSF had two.
This draw brings FGCU to a record of 3-2-1 and Cal State a record of 2-2-4.
The Eagles’ next game will be against ASUN opponent New Jersey Institute of Technology. Their Highlanders hold a record of 5-2 with a recent loss against George Washington University. The game will be away on Saturday, Sept. 22 at 3 p.m.