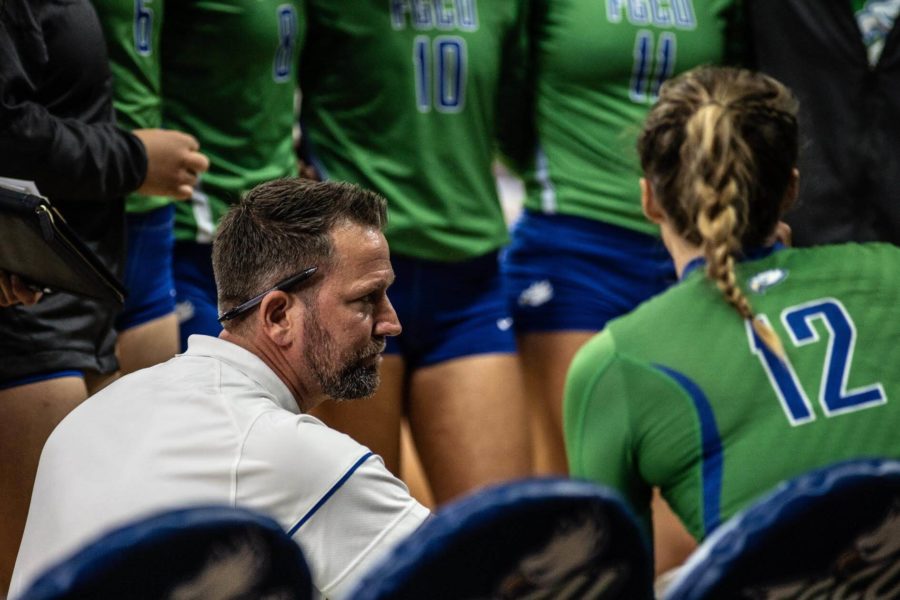 EN Photo by Bret Munson // Volleyball coach Matt Botsford talks to his players on the bench during a match at home. Botsford reached 100 wins with FGCU when the Eagles shut out North Alabama on Sunday.

By Jordyn Matez
Sports Editor
The FGCU women’s volleyball team swept North Alabama University this past Sunday in a three-game series to maintain a perfect record in the ASUN Conference, giving head coach Matt Botsford his 100th career win as a coach.
“I’m just very thankful for the opportunity that was given to me to lead this program,” Botsford said. “I’m thankful for the amazing players, both past and present, that put their heart and soul into this sport. I’m thankful for the talented coaches on our staff and appreciative of all their hard work and commitment to FGCU volleyball.”
This win makes Botsford’s overall record with the Eagles 100 wins and 43 losses over five seasons of play, with a 46-14 record in the ASUN Conference.
Statistically, the team shone on the court. FGCU hit .288 overall as opposed to North Alabama’s .065 percentage, with four girls reaching double-digit attempts (Cortney VanLiew with 32, Giovanna Borgiotti with 21, Snowy Burnam with 16, and Sharonda Pickering with 14). Burnam and Karissa Rhoades each tallied up two aces to add to FGCU’s seven overall.
Dana Axner tied for the program’s sixth-most digs in the Division I era with 22 digs, reaching her second-most digs in a match this season. VanLiew hit .313 individually, matching her double-double total from all of last season. Maggie Rick’s 27 individual assists were two more than all of North Alabama’s assists combined.
“I thought North Alabama did a very good job extending plays and taking advantage of our hitters once we entered transition,” Botsford said following the game. “We looked a bit slow off the floor and were far too indecisive as attackers. There was a lot of inconsistency in our play, and that will come back to haunt us if not addressed.”
Next, FGCU will remain at home to continue their efforts to keep a perfect conference record when they face ASUN competitor Kennesaw State University on Friday, Oct. 5 at 7 p.m.