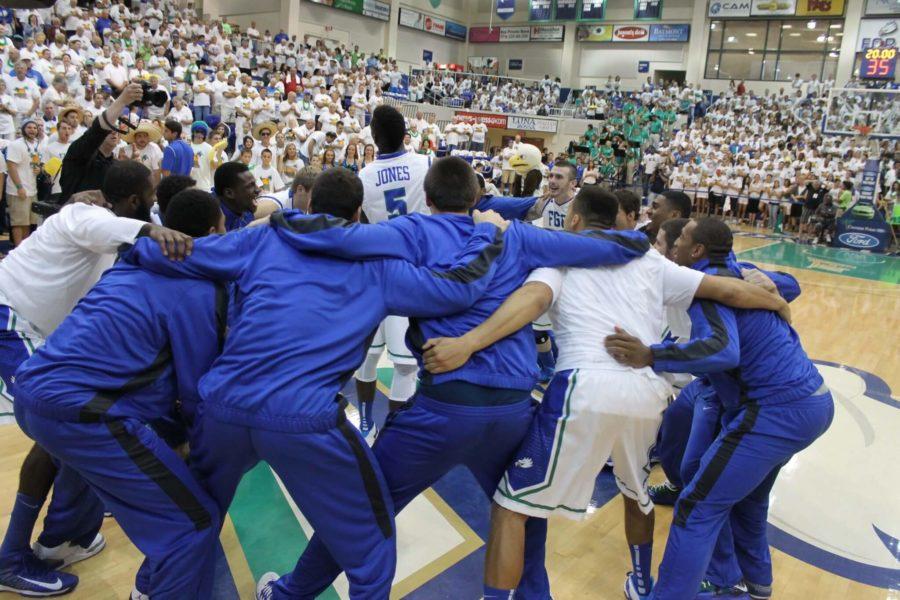 The Florida Gulf Coast University men’s basketball team is looking to advance to its third straight Atlantic Sun Men’s Basketball Championship final tonight when the top-seeded Eagles (21-11) take on fourth-seeded East Tennessee State University (18-14) at 6:30 p.m., at Alico Arena.
With a win, FGCU would become the fourth team in A-Sun Championship history to reach the finals in three straight seasons.
If FGCU wins, it would host on Sunday on ESPN2 at 2 p.m. The Eagles would play either third-seeded USC Upstate (19-13) or second-seeded Mercer (24-8) as those two battle in the second CSS semifinal tonight at 8:30 p.m.
In the quarterfinal games, FGCU dominated eighth-seeded Stetson, going wire-to-wire and beating the Hatters, 77-55, in front of a record crowd of 4,673. ETSU defeated fifth-seeded Lipscomb in double overtime, 89-88, Tuesday night after overcoming a 16-point deficit with eight minutes remaining.
FGCU and ETSU split the season series, with each team winning on its home court. In the first meeting, the Eagles dominated the Bucs to a 90-62 win. FGCU got off to a 32-9 start after the first 12 minutes, and never looked back.
In the second meeting, ETSU opening the game on a 12-0 run and hit eight 3-pointers in the opening 11 minutes. After trailing by as much as 19 points, FGCU got its deficit all the way down to just four, but couldn’t complete the comeback losing 89-81.
In the two meetings this year between FGCU and ETSU, the Eagles have out-scored the Bucs in the paint by 26 points, including +16 (38-22) at home.
Tonight’s semifinal round game is a greenout and will be broadcasted on CSS, which is channel 70.