Urinetown, The Musical ready to release this October 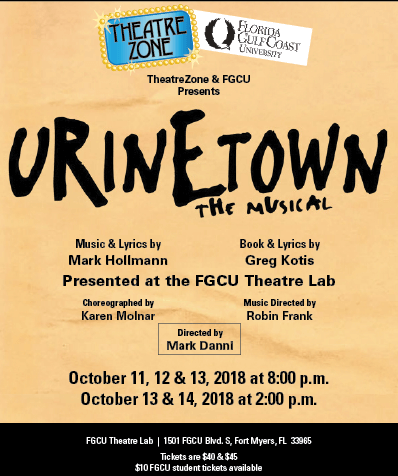 On October 11th, the FGCU Theatre Lab will open its doors for Urinetown the Musical, a collaboration between FGCU students and Theatrezone, which is a professional theatre company in Naples.
Urinetown is a satirical musical comedy that takes place in a town where a twenty year drought has caused a water shortage and eliminated private toilets. All public toilets are owned by the Urine Good Company (UGC) and the townspeople must pay to use them. People are prohibited from using the restroom anywhere other than the public toilets and if caught will be sent to “Urinetown”, a place no one has returned from. Because of this system, the poor are usually the ones sent off to Urinetown, until now when they decide to stage an uprising against the owner of the UGC and fight for the privilege to pee.
The musical will feature a cast of students from FGCU and 4 actors from the Theatrezone company along with FGCU professor Gerritt VanderMeer. The collaboration is done in an effort to help students see the inner workings of an actual professional theatre company.
Josh Needle, a sophomore at FGCU playing the part of Officer Barrel said “It’s been a truly amazing experience working with Theatrezone and it helps prepare us for a real acting environment.”
The show is a completely immersive experience since the Theatre Lab at FGCU has a thrust stage, which means that there is no physical barrier or distance between the audience and the actors on stage.
This makes the production especially unique and intimate with the audience.
The show is also immersive for the students that are in the cast, especially for Jordan Maloney who said that “Being a part of this production has helped me grow through learning from the other actors and feel like I’m part of the FGCU community. Even though I’m the only freshman in the cast, they’ve made me feel welcome.”
The cast has been long at work rehearsing and building the set since the late weeks of August and all of their hard work will come to fruition next week.The show will run from October 11 to October 14 with shows at 8 PM on the 11th, 12th, and 13th, and 2 PM on the 13th and 14th. Tickets can be found online at www.theatre.zone