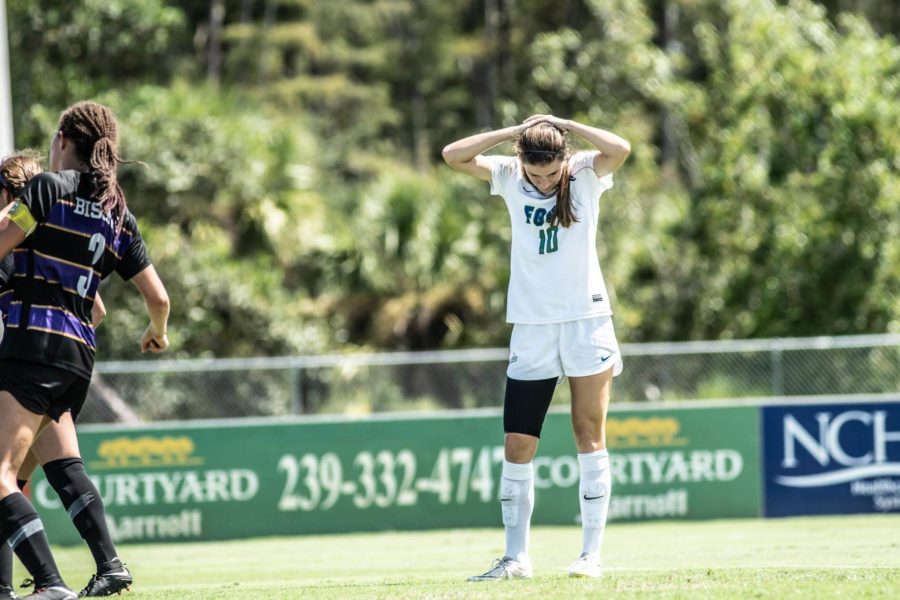 Regardless of FGCU leading NJIT 18 shots to seven, the Eagles couldn’t find the net once and suffered a 1-0 loss to drop them to fourth place in the ASUN Conference standings.
The first 45 minutes of the game consisted of heavy offense for FGCU, with NJIT laying back and holding up a strong defensive line. Half of FGCU’s eight shots in the first half were on goal, but NJIT goalkeeper, Amelia Sapirman, didn’t let anything past her to keep the Eagles from taking a lead. The Highlanders only managed one shot in the first half and the ball missed the goal entirely.
The one goal of the night came just six minutes into the second half, with NJIT scoring on a free kick to take a 1-0 lead in the 52nd minute. The score remained the same until the final buzzer.
The Eagles stayed vigilant throughout the remainder of the game and kept fighting, but struggled offensively, managing only one shot on goal in the final 38 minutes. The final score of 1-0 was FGCU’s second consecutive ASUN Conference shutout.
Evdokia Popadinova and Camille Knudstrup carried the Eagles offensively, racking up all five of FGCU’s shots on goal between the two of them. Popadinova found the net three times, while Knudstrup shot the remaining two.
“It obviously wasn’t the result we were looking for,” FGCU head coach, Jim Blankenship, said. “It just makes the rest of our conference games that much more important now as we are forced to chase results.”
Next, FGCU will continue on with conference play with a game in Kennesaw, Georgia against ASUN competitor Kennesaw State University on Sunday, October 7th at 1 p.m.