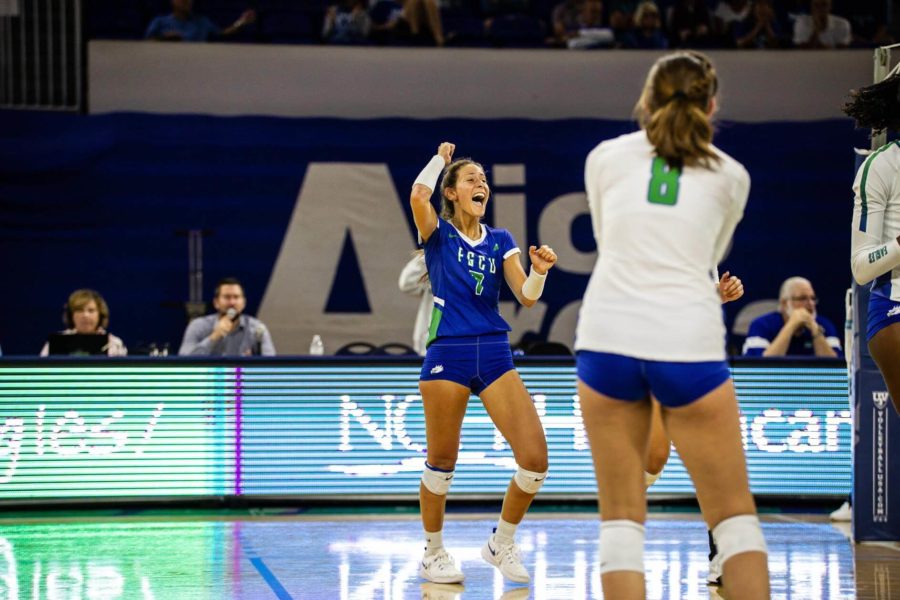 FGCU volleyball freshman Dana Axner has received her third ASUN Conference Freshman of the Week award recognition on Monday, Oct. 8.
“Dana had another great weekend and continues to anchor our floor defense,” FGCU volleyball head coach Matt Botsford said. “I thought her coverage and serving was much improved in these two matches and of course her ability to read the opposing hitters keeps progressing. What I really like is how engaged she is in recognizing how the games are unfolding and how she finds a way to make an impact. She is a focused competitor, and I know we are just scratching the surface of what she can become.”
On Sunday, Axner tallied up 20 digs, five assists and an ace over four sets against Lipscomb University, marking Axner’s second 20-dig performance over her past three matches and her fourth 20-dig performance so far this season.
Axner now holds and average of 4.6 digs per set over a season total of 290 digs, which rank second and fourth in the ASUN Conference, respectively. This total is just three shy of breaking the program’s top 20 single season records in the Division-I era (Amanda Carroll currently holds the next-highest total with 293). Axner is on track to break this record and more as she is entering her 19th career match.
Axner is also on pace to become the third player in the program’s DI era to earn 500 digs in a season, and her 4.6 digs per set currently ranks second best since 2007.
Aside from Axner’s two other ASUN Freshman of the Week honors, she was also named the ASUN Defensive Player of the Week for the week of September 11. Axner’s three Freshman of the Week honors tie for the most in program history with Amanda Carroll (2015), Danele Serrano (2016) and Cortney VanLiew (2017) She may also be on track to beat ASUN Conference record if she receives three more. North Florida’s Gabby O’Connell currently holds the record with five under her belt.
Next, Axner and the rest of the FGCU volleyball team will remain at home with a match against Stetson University on Tuesday, Oct. 9 at 6 p.m.