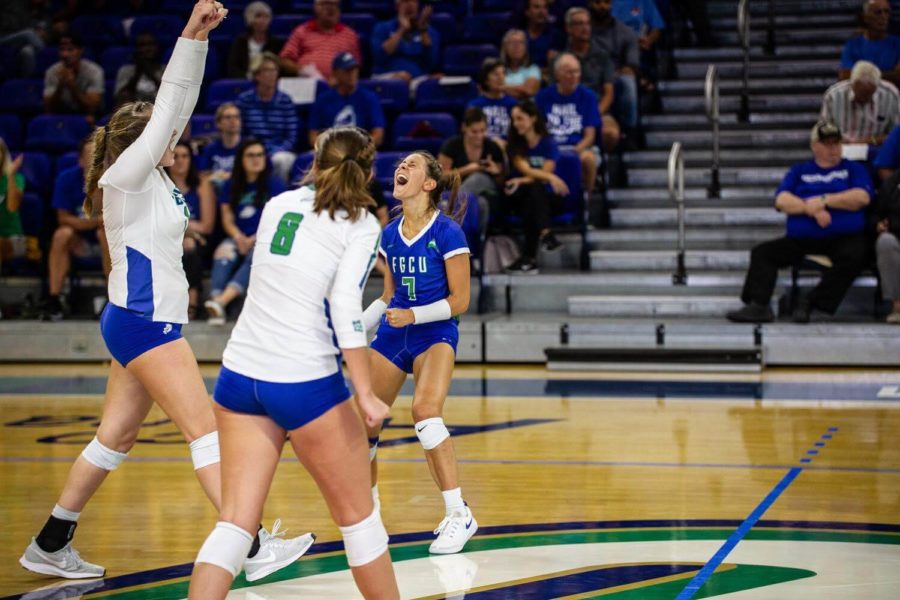 The FGCU volleyball team shut out Stetson University in a 3-0 conference match that also handed FGCU volleyball freshman Dana Axner a program record for the most digs in a three-set match in D-I history with her 28 digs throughout the night.
“We won tonight because of the defense and the blocking,” FGCU volleyball head coach Matt Botsford said.
“I think the second set we got away with, I don’t think we deserved that. We made a ton of errors and we were down 22-20 and somehow found a way to win. That shouldn’t have happened, I really think Stetson outplayed us in that set. Sometimes we’re making it closer because of poor decisions and we need to do a better job because rarely are you going to get bailed out the way we were tonight.”
The first set began with an even amount of effort seen on both sides of the court, with Daniele Serrano starting the Eagles off with a kill. The Hatters responded with a defensive approach, blocking another kill to even out the score. The score remained even for the most part throughout the earlier moments of the game, with each team responding to the point before.
The scoreboard remained within a one-point margin of either team until an impressive block by Giovanna Borgiotti gave FGCU a two-point advantage to make the score 6-4. Stetson responded with a kill by Julie Varga and the score once again remained close.
Another performance from Borgiotti seemed to be just what the Eagles needed to gain momentum, scoring an additional two points to bring the score to 15-10 FGCU.
Following a kill by Eva Deisa of the Hatters and an out-of-bounds shot on FGCU’s part, Borgiotti started another three-point run for the Eagles, widening the score margin to five as FGCU led 18-12.
This lead was all FGCU needed to secure a set win, as the Hatters weren’t able to come back and managed only three additional points by the end of the set, which finished with an error on Stetson, making the final score of the first set 25-15.
The second set proved to be just as close, with neither team leading by a margin of more than four points throughout the entire set.
The game began with an out-of-bounds shot and an error on FGCU, giving Stetson an immediate 2-0 advantage. Sharonda Pickering of FGCU came through with a kill to put FGCU on the board and start a four-point run to make the score 4-2.
A pair of back-to-back kills a little further on raised the score to 7-4 FGCU, but the advantage didn’t last long due to an error on FGCU and a kill by Stetson Varga. This momentum gave Stetson the opportunity for a small run that would eventually end with a kill by FGCU’s Borgiotti to bring the score to an even 8-8.
Shortly following this the Eagles fought back with a five-point run of their own to bring the score to 16-12. Setson refused to fall behind this set, however, and pushed back with yet another run to take a lead over FGCU at 17-16.
From this point forward the score remained close, with neither team surpassing the other by more than two points. This resulted in a 24-24 tie to send the set into extra points. While Stetson pushed full defense to keep FGCU from taking the set four times but never got a shot of their own and the Eagles eventually took the set with a block by Serrano to bring the final score to 29-27.
Stetson had one more chance to keep their team in the match with the third set and took on an offensive approach right off the bat. A block and a pair of kills gave the Hatters a 3-0 lead to start off the third set, but back-to-back kills from Serrano and Pickering kept FGCU in the game.
Stetson continued to bring the heat and strengthen their lead by optimizing on FGCU’s errors to bring the score to 7-3, which would ultimately be Stetson’s largest lead of the set.
The Eagles continued to counter the Hatters’ plays and kept the game close enough for Serrano to score a point to bring the score to 12-11 and hand the Eagles their first lead of the match.
This point would prove to be vital to the outcome of the game, as FGCU was no longer at a disadvantage. While the game continued to be fairly close, Stetson was unable to bounce back from their disadvantage, regardless of holding FGCU at match point for four rounds of play. The final play of the game came from an impressive kill from Borgiotti to hand the Eagles a 25-21 set win and a 3-0 shutout to bring the Eagles to 5-1 in conference play.
Dana Axner also saw a big night, breaking a D-I era program record of the most recorded digs in a 3-set match with her 28-dig performance.
“Honestly, I’m not expecting to break any records,” Axner said. “It just happens because the team is playing so well together and I just click so well with them”