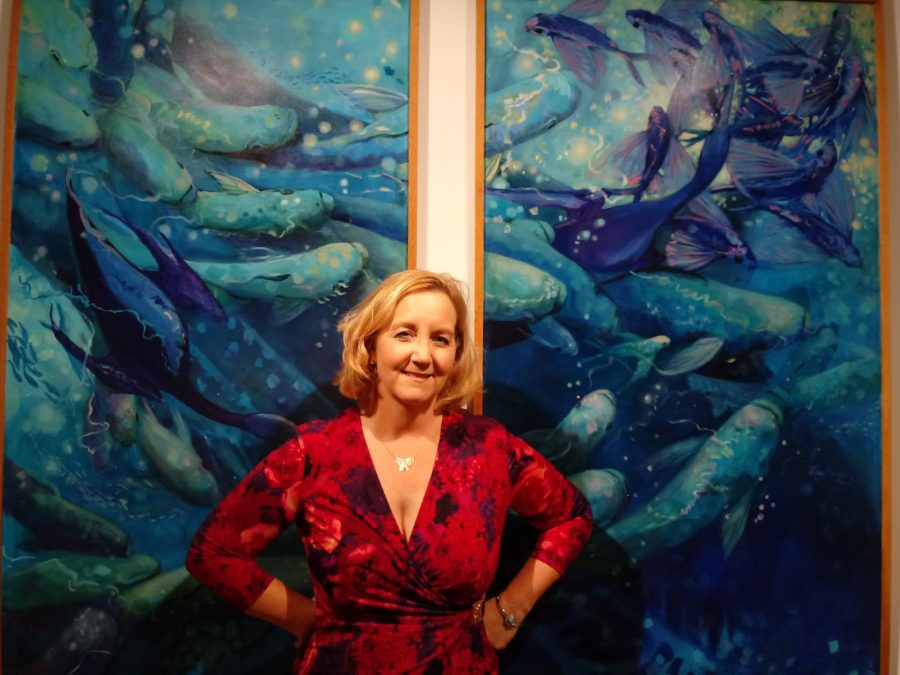 Raised in Perdido Bay, Fl., Megan Kissinger is one of the most exuberant and vibrant artists to grace the walls of an art exhibition. A class of 2004 FGCU alumni, Kissinger won the chance of a lifetime – having one of her masterpieces featured in both the U. S. Museum of the Interior in Washington, D.C., and the American Embassy in Bahrain, United Arab Emirates. Since then, she’s been going nowhere but up. However, it was not an easy and smooth journey.
Kissinger began her art career as an art major at the University of West Florida at 17, and by the end of her sophomore year had already met her future husband. Following graduation, she was momentarily jobless and worked in art galleries until FGCU began its art program. Kissinger got into FGCU, continuing to work on her craft, strengthening her trade, giving birth and taking care of her children while working toward her degree.
Her works, featured in the Tropical Reunion Exhibition in the FGCU Library ArtLab, were created from the questions bouncing around in her head, and using “the leftover donut holes,” that are throwaway pieces and semi-ruined objects, transforming them into beautifully unique artworks. With her skill, Kissinger shows that there is still beauty in ruined things; while imperfections do exist, there is always hope remaining.
One of the hardest challenges artists still face is having to market their work. For Kissinger, the healing effect that art has, in particular, painted art, is one of the driving fires keeping her passion ignited.
“The part of your brain that you use to make art is the part that heals you,” Kissinger said during the opening of her exhibition on Oct. 5. “You’ve heard of art therapy; the way your brain works when you’re doing creative things is such a good thing… it works the same way as when you’re worshipping or when you’re meditating. It’s almost the same way your brain works when you’re making something creative art. So, in some ways when you’re having a bad day, doing something creative is very soothing and very healing.”
It is no stretch to say there isn’t a high demand for artists in the job market. Fortunately, Kissinger landed a marketer who went above and beyond with getting her work into the world, jumpstarting her career. This, along with sheer good luck, is how one of her paintings became one of thirty selected to be featured in the American Embassy in Bahrain. Her work featured in Bahrain became a limited-edition Yankee Candle called Everglades National Park.
For all her accomplishments, there is still more in store for Kissinger. Her audience (her fellow Floridians and whoever else) will continue to take the time to listen to what her brushstrokes and color blends have to say.
Kissinger says that her ultimate goal is to create beautiful things that speak to people and make them want to appreciate the natural world. “When I make art, I’m constantly trying to show people how things are connected, and how seemingly insignificant things are actually important things — like the bacteria in the soil. It doesn’t sound like it’s important, but the bacteria in the soil is the foundation for everything above it.”
“So, you can start right there and go all the way to the apex predator,” Kissinger continues. “If you don’t have the right soil it causes a domino effect. It’s a combination of wanting to make connections between habitats and how all the living things are connected in a web. In fifth grade, science teachers talk about the web of life, but it really is true that everything sort of works together and when one piece is taken away, it falls apart. In the artwork, I really like to show how an animal or an environment connects to everything. I just like making art.”
Kissinger’s point of view is that art is not only a way of expression, but it can also serve as a gift presented in the most beautiful way along with an equally stunning lesson.
Kissinger also challenges her audience about their future: “[When this] grand party we are enjoying called modern life [is over] who will pick up the pieces? Who will make right what has been overturned? Who will be the responsible ones and mop up the spills? The sheer certainty that everything around us will someday go away lurks just under our consciousness. More importantly, we will someday too be gone. The skill underneath our pretty face is just a touch away. What will be the relics we leave behind?”
Kissinger currently works four days a week at the Edison & Ford Winter Estates as a museum conservator and set designer. She also has a studio at home where she makes art that is sold to regional art galleries.
The Library ArtLab Gallery is located from the entryway the west end of the FGCU Library, the pair of doors right before entering the library.