“Every time we speak, our ancestors are in the room” 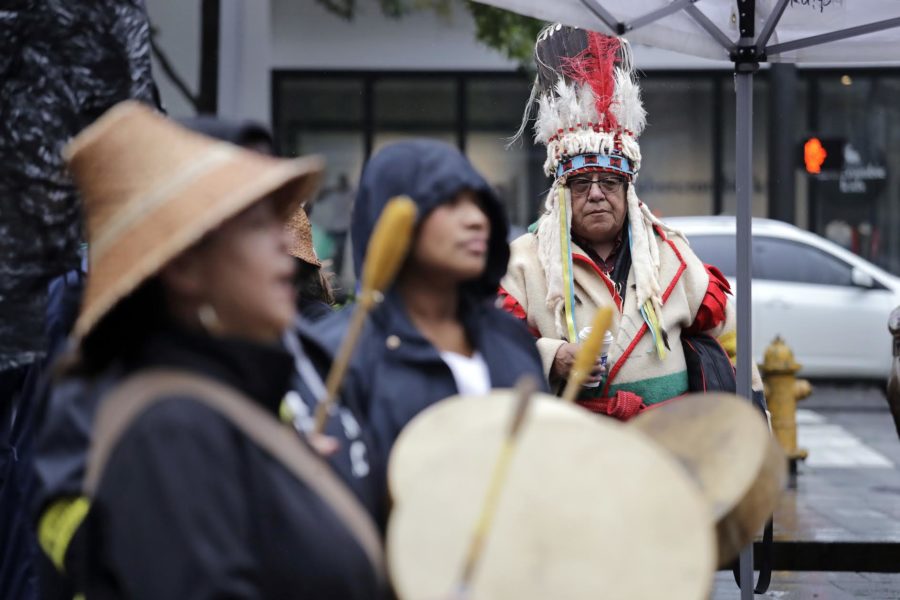 Leon Rattler, right, a member of the Blackfeet Nation, looks on as women drum during an Indigenous Peoples Day blessing and rally before a march Monday, Oct. 8, 2018, in Seattle. In 2014, the Seattle City Council voted to stop recognizing Columbus Day and instead turned the second Monday in October into a day of recognition of Native American cultures and peoples. (AP Photo/Elaine Thompson)

In light of Indigenous Peoples Day (a counter-celebration to Columbus Day), the massively influential figure, Lee Maracle, had a conversation with audience members in the Cohen Center Ballroom about Native Americans in Canada.
Beginning with jokes and a brief history lesson about the corrupt education system, the conversation drifted to how Natives have been manipulated, starved, kidnapped, and murdered in the name of education for Canadians.
This topic segwayed into Maracle illustrating how she became a voice for her people, the Sto:Lo Nation, and helped pave the way for Native representation in fields within universities — such as medical and law — and within her local government.
Maracle told stories of meeting the Solicitor General of Canada, of her being one of the sole surviving Natives forced to attend  the Canadian schools, and she coordinated peace talks that ended hundred years of tension between the two nations.
To this day, Maracle works at the University of Toronto First Nations House and continues to use her voice and knowledge of sociology and her people’s customs to put her foot down and demand reparation and representation for people of color throughout Canada.
Her accomplishments were very inspiring and all those in the Cohen Ballroom gave a loud applause at her finish.
“Every time we speak, our ancestors are in the room,” she said, and then proceeded to her next story about her accomplishments.
Hearing about her does not have as much impact as seeing Maracle in person — it is a marvelous experience that is a spectacular way to end Indigenous Peoples Day holiday.
Maracle is a member of the Order of Canada, a Cultural Instructor, and a Sessional Lecturer.
She is also an Indigenous Elder, a mother, grandmother, and author of several books.