Axner and Serrano break records with Player of the Week honors 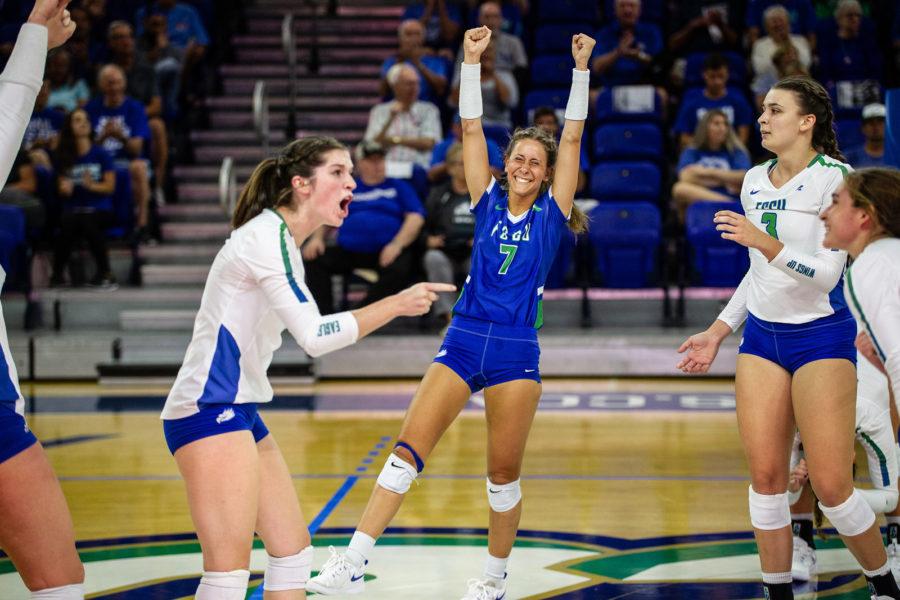 EN Photo by Bret Munson // Dana Axner, center, and Daniele Serrano, to her right, celebrate during an FGCU home game. Axner and Serrano have broken many records this season for FGCU Volleyball.

Dana Axner and Daniele Serrano have earned the ASUN Conference Freshman of the Week and Defensive Player of the week, respectively, for the week of Monday, Oct. 15. This marks Serrano’s second career Defensive Player of the Week award and Axners fourth (second consecutive).
With this week’s award comes another record for Axner, who now holds the most Freshman of the Week titles in program history. If her pattern of strong play continues, Axner may be on track to beat UNF’s Gabby O’Connell for the most Freshman of the Week titles in ASUN Conference history.
“Dana just continues to impress with her consistency and competitiveness,” FGCU head coach Matt Botsford said. “And as good as she has been, she knows there are areas she needs to continue to develop. That desire to continually improve is what makes her so much fun to work with and is why she is having so much success this early in her career.”
With her second Defensive Player of the Week award, Serrano ties FGCU’s record for the most in program history. Most recently, Serrano finished with 11 kills in volleyball’s win over Stetson, which is just one shy of her season-high of 12. After her performance over the past week, Serrano now places second in the program’s Division-I era in solo blocks, with 45, assisted blocks, with 250, and total blocks, with 295. With her current stats, she is on track to become the all-time leader in block assists and total blocks by the end of this season.
“Dani’s attention to the small details of blocking have really paid off this season,” Botsford said. “She is doing a phenomenal job for us impacting the game both offensively and defensively. That kind of growth is what you hope for as a coach – the development of a complete game.”