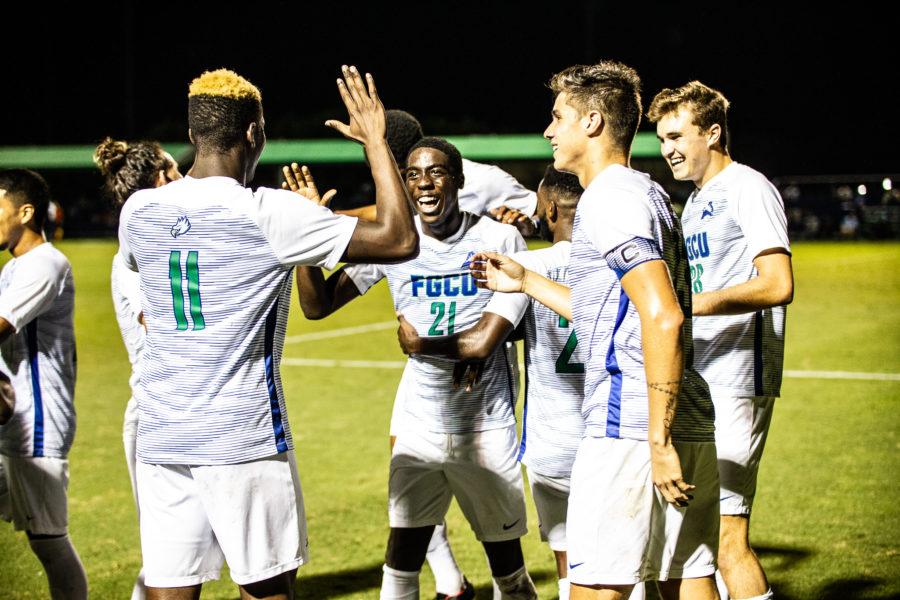 EN Photo by Bret Munson // THE FGCU men's soccer team celebrates after a goal against UNF.

The FGCU men’s soccer team defeated ASUN rival UNF 5-0 on Wednesday, Oct. 24. This win puts the Eagles atop the ASUN conference tied with Lipscomb heading into the last regular season game
Coming off back-to-back losses, the Eagles were looking to rebound in conference play against the Ospreys. FGCU got the results the team wanted, scoring five goals for the second time this season.
This win for the Eagles is also the team’s highest margin of victory this year, as FGCU moves to 8-5-1 overall. They are now 4-1 in conference play. UNF moves to 3-9 overall and are 2-2 in conference play.
The Eagles came out strong, scoring their first two goals within 10 minutes. The first goal was deflected off a UNF defender during a corner kick. The second goal was scored by senior Dennis Zapata, converting FGCU’s first penalty kick of the season.
“All the energy was there, everybody was on point, everyone was doing their jobs, and the result speaks for itself,” FGCU senior captain Dennis Zapata said.
Minutes into the second half, FGCU mirrored its first half performance by scoring two quick goals in the 61st minute and 63rd minute.
In the 61st minute, goalkeeper Gustavo Vasconcelos put the ball into play and passed to O’Vonte Mullings, who ran up the field to find Miguel Perez on a cross. Mullings was able to find the back of the net with a cross from Titoquan Le Menec in the 63rd.
“I didn’t really expect this,” Mullings said of his performance.” I just expected to contribute to the team that the best that I can, and just do what I do.”
His goal on Wednesday night was his seventh of the year and ties with Shak Adams for most on the team in the season.
The third goal of the half was scored by Joao Burti, adding his fourth goal of the season with four minutes left in regulation.
“I thought today was a great step,” FGCU Head Coach Jesse Cormier said. “When these guys come together and compete, we’re tough to beat.”
The Eagles will wrap up the regular season on Saturday, Oct. 27, as they travel to Jacksonville in hopes to secure the one seed for the ASUN tournament. Overall, FGCU is 9-3 head-to-head against Jacksonville University, winning nine straight games dating back to 2010.