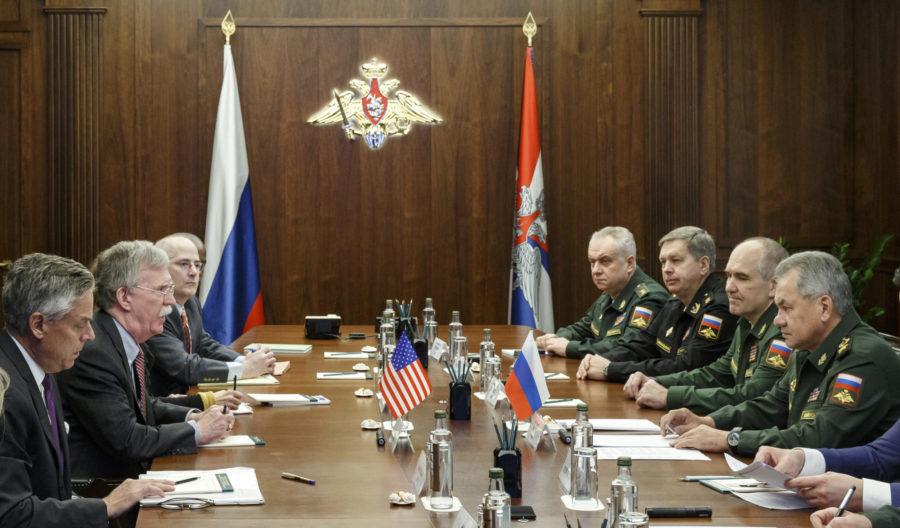 By Veronica Armbruster
Staff Writer
According to CNN, the New York Times and The Guardian, the United States has withdrawn from the Intermediate-Range Nuclear Forces (INF) Treaty as of Oct. 20, 2018.
The reasoning given is confirmed intelligence from the North Atlantic Treaty Organization, which claims that Russia has created a new type of cruise missile. The development and creation of the missile puts Russia in violation of the treaty, according to President Trump.


“We’ll have to develop those weapons, unless Russia comes to us and China comes to us and they all come to us and say let’s really get smart and let’s none of us develop those weapons,” President Trump stated from Nevada, as told to WGN-9 Chicago. “But if Russia’s doing it and if China’s doing it and we’re adhering to the agreement, that’s unacceptable.”
The INF Treaty was signed in 1987 by the previous Union of Soviet Socialist Republics (USSR) and the United States. Back then, Premiere Mikhail Gorbachev and President Ronald Reagan sought to make peace through the destruction of 2,700 short-range and medium-range missiles. The event also stopped the standoff between the U.S. Pershing Missile System and the Soviet SS-20 missiles in eastern Europe.
It was one of the major turning points of the Cold War.
Many questions plague the issue of backing out of the treaty. First of all, what made President Trump turn his back on President Putin after seemingly idolizing the individual since his campaign for American president in 2016? Does hawkish National Security Advisor John Bolton have something to do with it?
How does United States Ambassador Nikki Haley leaving her post tie in with the backout – with both Russia and China having permanent seats at the United Nations Security Council?
Why would an American deterrent against Russian nuclear arms be connected with strategic arming against China?
Will this eventually lead into another Cold War – or did the original Cold War never really end?
Depending on how those questions are answered in the future, the final question stays: Just how involved should the United States be on the international stage?
Global entrenchment of the United States in foreign affairs is inescapable. As much as some would like to see the United States withdraw from the global stage, there is no possibility of that – especially in the age of the internet.
There are American companies spread out on a global scale, which cannot be retracted without fatal economic consequences, such as Boeing and Heinz.
Facebook is in Ireland. Cisco is in South Africa. Wal-Mart is in Beijing. Nissan parts are shipped from Tokyo to Alabama. Crude oil is sent in from Saudi Arabia.
Along with the global economic growth, the American military presence is well-known, particularly in Europe, South East Asia and the Middle East. If these bases were to be shut down, not only would thousands of military service members be out of work, but the protection of American assets and interests would cease to exist.
We as college students should care about this.
A large number of college students are military veterans. You have seen first-hand the effects American aid, military and diplomacy has on the international populous.
The way of life that one has come accustomed to in the United States is also derived from globalism and will continue to be. Our friends and fellow students who study with us come from around the world.
We get our clothing from China. We get our vegetables from Mexico. We get our laptops from South Korea. We get our Rose wine from France.
Therefore, the United States cannot (and should not) withdraw from global affairs. It is a huge part of our past, present and future.
After all, someone has to make sure Russia doesn’t start World War III.
Delete Image
Align Left
Align Center
Align Right
Align Left
Align Center
Delete Heading