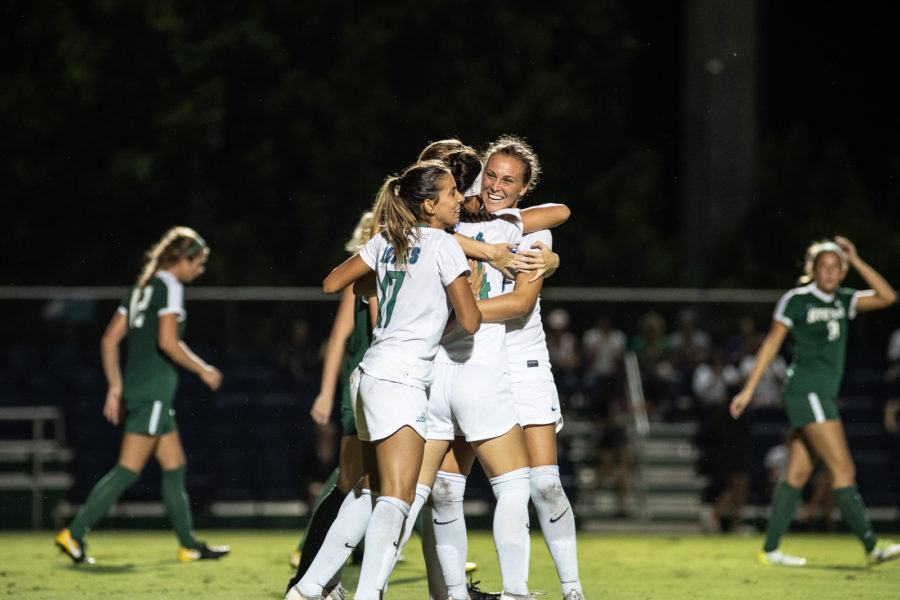 EN Photo by Bret Munson // Women's soccer celebrates after a win at home.

By Jordyn Matez
Sports Editor
With a 2-0 lead going into the 80th minute, the FGCU women’s soccer team managed to hold off Liberty University — regardless of their goal in the early 82nd minute — to win the match 2-1 and advance to the semifinals of the ASUN conference championship.


The game began slow with both teams pushing an equal amount of offense and defense to keep each other away from the net. Liberty was the first team to find the net, putting a shot on goal in the 13th minute that was saved by FGCU goalkeeper Melissa Weck. Weck, who was forced to leave the game moments after her save due to an injury, returned to the game in time to make another save in the 26th minute to hold Liberty off.
Two minutes later, FGCU’s Marjorie Boilesen assisted Evdokia Popadino in her 14th goal of the season to give the Eagles a 1-0 advantage going into the second half.
Early on in the second half a penalty kick in favor of FGCU proved to be vital to the outcome of the game, as Camille Knudstrup sent the ball to Cassidy Morgan, who hit the ball off her head and gave the Eagles their winning goal.
This goal gave the Lady Flames the determination to fight back and aided them to a goal in the 83rd minute. Liberty failed, however, to even out the score by the final buzzer and were eliminated from the ASUN conference championship as FGCU moved forward to the semifinals.
“I am proud our ladies and how well they handled the pressure at the end of the game to live to play another day” head coach Jim Blankenship said.  “Melissa (Weck) made a big save late and the defense held up for us again.”
Next, the Eagles will advance to the AUSN semifinals in Nashville, Tennessee, where they will face the No.1 seeded Lipscomb University on Sunday, Oct. 28 at 2 p.m.
Delete Image
Align Left
Align Center
Align Right
Align Left
Align Center
Delete Heading