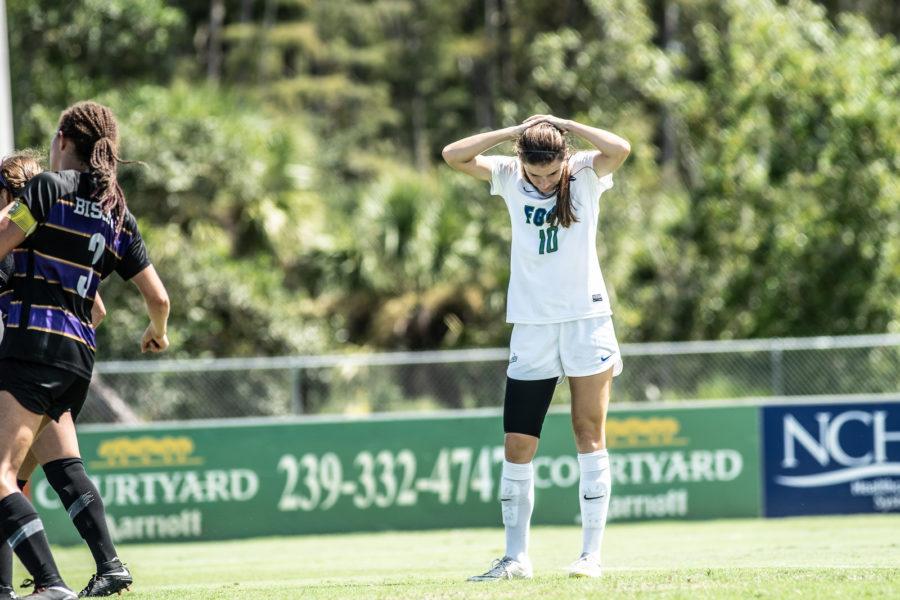 The FGCU women’s soccer team fell to Lipscomb University 1-0 in the ASUN conference semifinals this Sunday, marking the FGCU women’s soccer program’s first ever regulation loss in ASUN tournament play.
The game began on a positive note for the Eagles, who managed to find the net twice in the first six minutes of play, but Lipscomb goalkeeper Kate Mason ensured that no points were scored.
While the scoreboard remained empty for the entirety of the first half, FGCU statistically had the upper hand. All five shots of the first half were FGCU’s, as well as the only two corners of the first half.
The second half showed a bit more promise for the Lady Bisons as they managed to get a pair of shots in the first 10 minutes of the second half but were unable to get the ball past FGCU goalkeeper Melissa Weck.
Both teams showed an even amount of effort throughout the second half, but a Lipscomb goal in the 70th minute secured the eventual outcome of the game. The goal came from Lipscomb’s Logan McFadden, and even though Weck managed to get a piece of the ball, she failed to keep it out of the net.
FGCU kept up the defensive edge throughout the game to keep Lipscomb at one goal but was unable to find the goal themselves, handing the Lady Bisons a ticket to the ASUN championship at the final buzzer.
In all statistics but the final score, FGCU had the upper hand, leading 13-4 in shots, 7-2 in shots on goal, and 5-1 in corners.
“It was a difficult day and a tough way to have the season come to an end” head coach Jim Blankenship said.  “I thought we played well and created plenty of opportunities, but credit to Lipscomb, they made the play when they needed to.”
This was the fourth straight season that FGCU and Lipscomb have faced off in the ASUN finals, with this 1-0 win breaking a long winning streak for the Eagles. This is also the first time in program history that the Eagles have failed to make it to the ASUN conference finals.