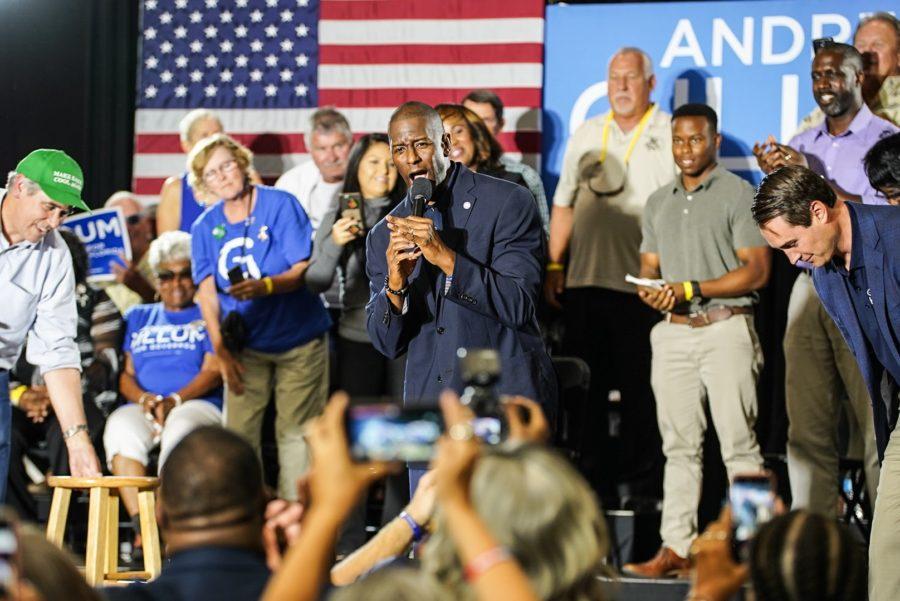 EN Photos by Bret Munson // Andrew Gillum addresses the crowd at his rally on Tuesday, Oct. 30. Nearly a thousand people attended the rally.


Nearly 1,000 people swarmed the park in a venue that holds about 180 seats, some holding notecards prepared with questions for Gillum and running mate lieutenant governor Chris King.
As Gillum reached the stage he was met by cheers and signs that read “Bring it home”. Gillum acknowledge the crowd by urging attendees to vote.
“We have literally handed over the keys of our environmental protection to some of the biggest polluters in the state,” Gillum said. “On Nov. 6, we all have an opportunity to change that. But it requires all of us being involved in this process and gauging and most importantly voting as if our lives depended on it.”
Gillum touched on issues like the expansion of solar energy, saying Florida “ought to be second to none” in the production of renewable energy and hopes to extend it residentially, including to those who may not own their own property.

Many companies don’t allow tenants to install solar panels on homes unless they own the property, Gillum said.
King said Florida needs to be an innovative economy, and the administration will focus on funding resources to agencies and scientists.
According to King, the University of Central Florida is working on placing solar panels in retention ponds.
“When you live in a state that is surrounded by water on three sides you better believe your very livelihood, your very survival, depends on building a state that is more resilient in the face of that,” Gillum said.
When asked about what he considered the most important issue the state faces, Gillum highlighted health care.
“We have a governor that has refused to expand Medicaid for over 800,000 of the most medically needy people in our state,” Gillum said. “We have folks that are an illness away from bankruptcy.”
Gillum criticized governor Rick Scott for not accepting federal funds to expand Medicaid.

As the line curled around the park, people of all walks of life including FGCU students. One student, History major Dominick Mellusi, said it’s important to understand what political culture looks like.
“Even if you disagree with someone, or if you agree with them, you should go out and try to have as many conversations as possible.”
Fort Myers resident and self-proclaimed proud democrat, Margaret Singer, said she is concerned with climate change and is angry with Scott’s administration.
“It’s shameful to have him as our governor,” Singer said. “Early in his administration, he forbade his staff to use the word climate change, but everyone in Florida knows that the seas are rising. People on both sides have recognized that it’s real, its actually happening.”
The town hall meeting comes off the heels of a poll conducted by the University of North Florida, that reveals Gillum is in the lead by six points for the gubernatorial seat.
Midterm elections are on Nov. 6.
Delete Image
Align Left
Align Center
Align Right
Align Left
Align Center
Delete Heading