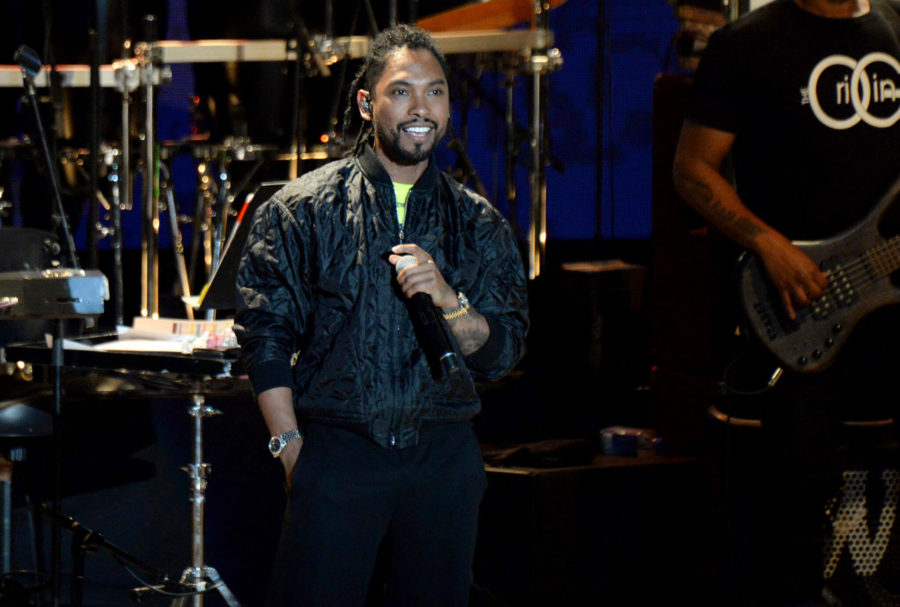 Miguel performs during the tribute event Mac Miller: A Celebration of Life on Wednesday, Oct. 31, 2018, at the Greek Theatre in Los Angeles. (Photo by Amy Harris/Invision/AP)

By Bruno Halpern
Entertainment & Lifestyle Editor
Eaglepalooza 2018 is almost here, and this time Miguel is the main star. J.I.D. was recently announced as the opener after previous opener Mark E. Bazzy had to cancel.
But Eaglepalooza has been going on for a few years now. Do you know who were the big stars that rocked Hertz Arena (formerly Germain Arena) in the past?
Here is a quick retrospective of previous Eaglepaloozas, so you can warm up.
2017
Cole Swindell, a country star, performed for the concert.
2016
Baauer, D.R.A.M. and T-Pain made “a concert for the books.”
As written by former E&L Editor Allie Taylor, “D.R.A.M. appealed to the college-student masses by talking about money, being broke and getting that paper on pay day. With his funny dances and amazing voice, D.R.A.M. gave the audience a great show.
“Baauer looked just the right amount comfy on stage in a casual gray hoodie and jeans. He delivering a truly outstanding set in 40 minutes that flew by. In layman’s, his performance was nothing short of ‘lit.’
“T-Pain took away the night with a plethora of throwbacks, from ‘Cyclone’ to the 2008 hit, ‘Low.’ He took us from memories of middle school dances to the present with his newest single with Lil Yachty, ‘Dan Bilzerian.'”
2015
Natalie La Rose and Big Sean were the headliners.
Former Eagle Cait Schall covered the 2015 edition, and wrote that, “After La Rose’s energetic performance, headliner Big Sean took the stage and kept the high energy going. He performed a lot of favorites such as ‘Blessings,’ ‘Clique’ and ‘Open Wide.’ (…) He ended the night performing “I Don’t F*** With You,” with the rest of the crowd singing along as loud as they could.”
2014
As reported by Allie Taylor yet again, “the final performance was saved for J. Cole. He had the stadium loud and kept everyone jumping with full of energy. He performed his well-known hits such as ‘She Knows’ and ‘Crooked Smile’ off of his most recent album ‘Born Sinner.’ He even threw it back to ‘Work Out,’ an older song from his ‘Cole World: The Sideline Story’ album, which debuted at number one on the U.S. Billboard 200 chart.”
We hope to see you at Eaglepalooza on Friday, Nov. 2!