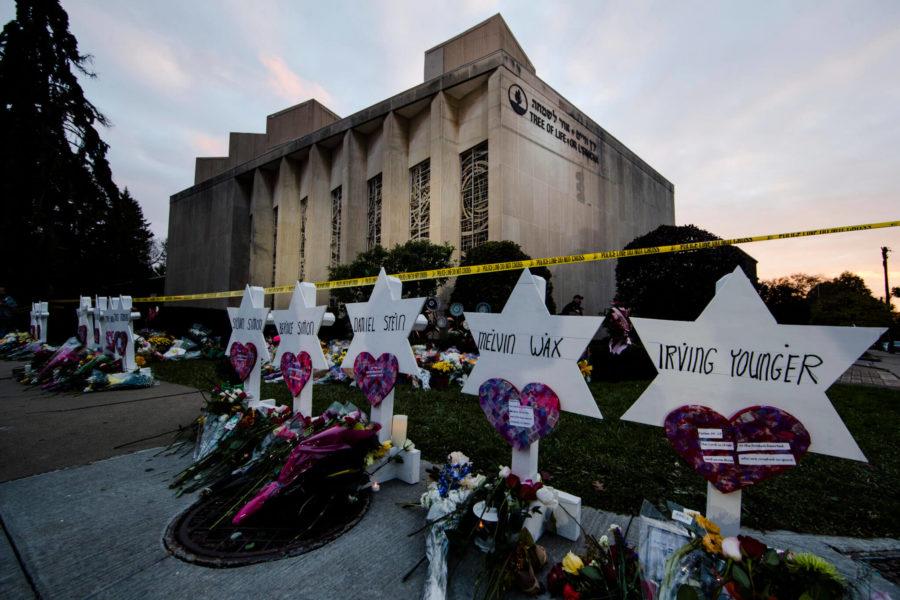 When I first heard about the shooting at the Tree of Life Synagogue in Pittsburgh, my immediate reaction was not surprise. It was not dread or even a loss in faith. My response was instead confirmation.
The first thought that went through my mind when I heard about the deadliest anti-Semitic crime in American history was confirmation of everything I had been taught growing up as a Jewish adolescent in America. This may come off as far-fetched to some people, but take it from someone who has been trained to spot anti-Semitism and combat it: anti-Semitism is not coming back from the dead.
Anti-Semitism in America has been alive and thriving for the past 70 years.
Now, this isn’t to say that America hasn’t seen an influx of anti-Semitic hate crimes recently. According to Laurie Goodstein of The New York Times, experts in anti-Semitism credit the presidency of Donald Trump as one of the key factors in the increasingly hostile growth of the the controversial climate in America over the past two years. This, mixed with rising anti-Semitic incidents in Europe recently, has created a new wave of anti-Semitic hate crimes that our society hasn’t seen since the reign of Hitler.
These same experts identify the turning point in America’s rise of anti-Semitism as the white supremacy rally in Charlottesville, Virginia, where lines of men carried torches and chanted, “Jews will not replace us.”
Due to all of these contributors and more, The Anti-Defamation League logged a 57 percent rise in anti-Semitic incidents in the United States in 2017 compared to the previous year. These incidents include bomb threats, assaults, vandalism and anti-Semitic posters and literature found on college campuses.
As a 19-year-old sophomore in college, I have experienced the effects of all of these incidents firsthand at least once in my life if not more. Most relevant is the anti-Semitism I’ve experienced as a student at FGCU. The most popular and common example is, of course, FGCU’s famous library lawn preacher.
While I understand that this man comes to campus simply to preach hate, this does not make his hateful comments towards Judaism any less real. This man represents a certain part of society that truly does believe the things that come out of his mouth and implants these ideas into the minds of people who take the time to stop and listen.
I’ve also experienced anti-Semitism on a more personal level; more specifically, by a fellow student. I happened to be talking about experiences I had during my time at Hebrew school as a child, when I was cut off by a passerby who had stopped to announce to the whole room that “Jews control America.”
There was no prompting this; just the mere mention of a personal experience related to Judaism gave this student the gateway she needed to launch into an explanation of how she thinks the corrupt Jewish people were the reason behind everything that is wrong with our country.
While thankfully I go to a college where it is much safer to be open about my Judaism than other campuses in our country, the ADL reported that white supremacist propaganda on college campuses nearly doubled in the 2017-2018 school year from the year prior – and Jewish college students like myself are not surprised.
I spent the better part of my high school career in a Jewish youth group organization called BBYO. On multiple occasions during my time with the organization, I sat through a presentation from StandWithUs, a non-profit, pro-Israel education and advocacy program. This program most recently conducted a report, based in the University of California, which describes how the college’s political climate has turned into a hostile climate for Jewish students.
These presentations were meant to educate 11th and 12th grade students on how to combat anti-Semitism on college campuses and were basically glorified safety training about the hate crimes we were expected to ignore. At the time, I thought nothing of the severity of these presentations, but I now realize how horrifying it is that the conservation needed to happen at all.
Under no circumstances should Jewish high schoolers have to be told in ‘The Land of the Free’ that they can’t freely exercise their right to an education without inevitably experiencing some form of anti-Semitism.
While these may be tame examples of the anti-Semitism my religion is facing in America today, they should in no way be taken lightly. This is not a new trend, and this isn’t something everyone can ignore. Whether you practice Judaism or not, in one way or another, you will feel the effects of the rising anti-Semitism in our society, because the hatred seen in our country is not just a Jewish problem — it’s an American problem.